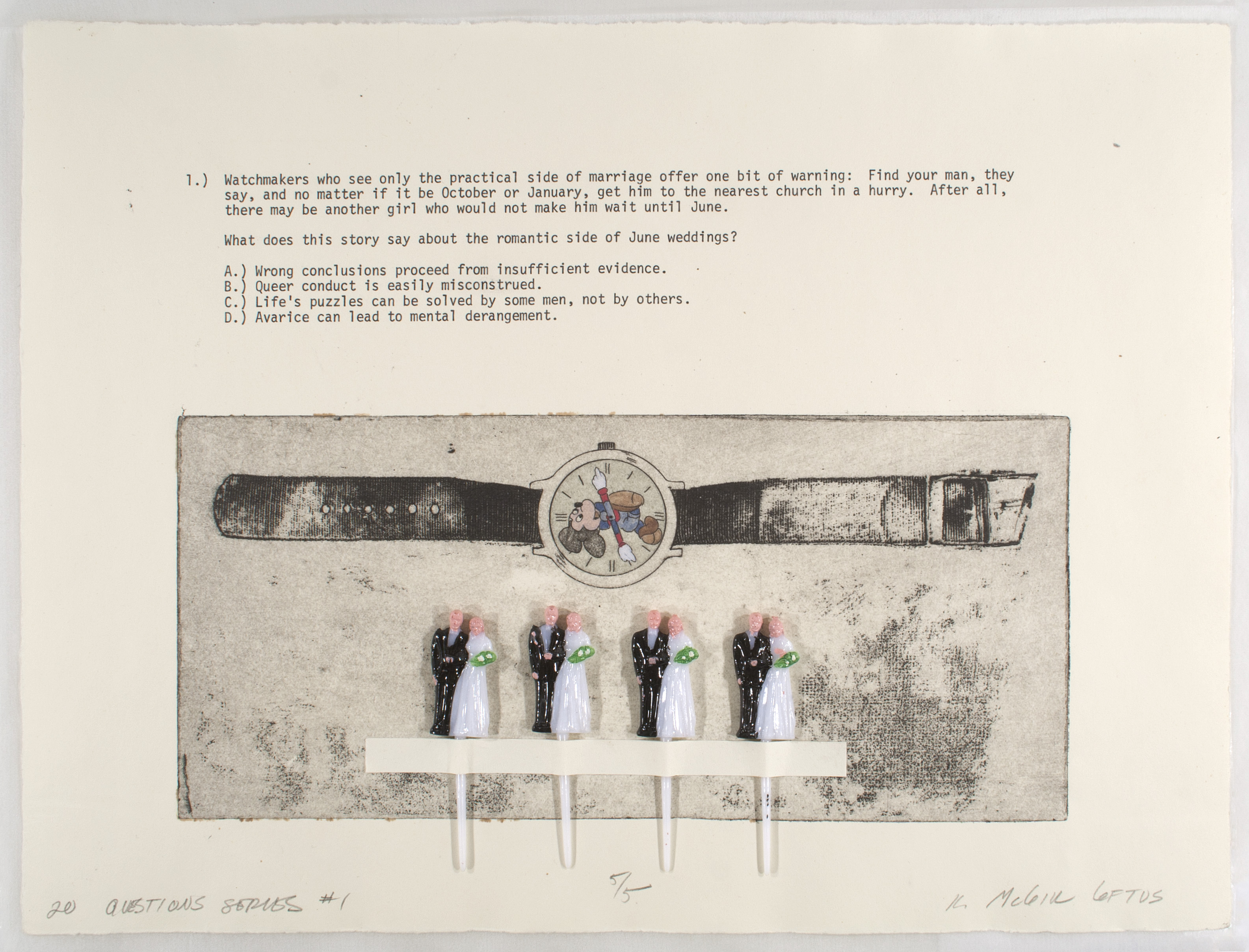 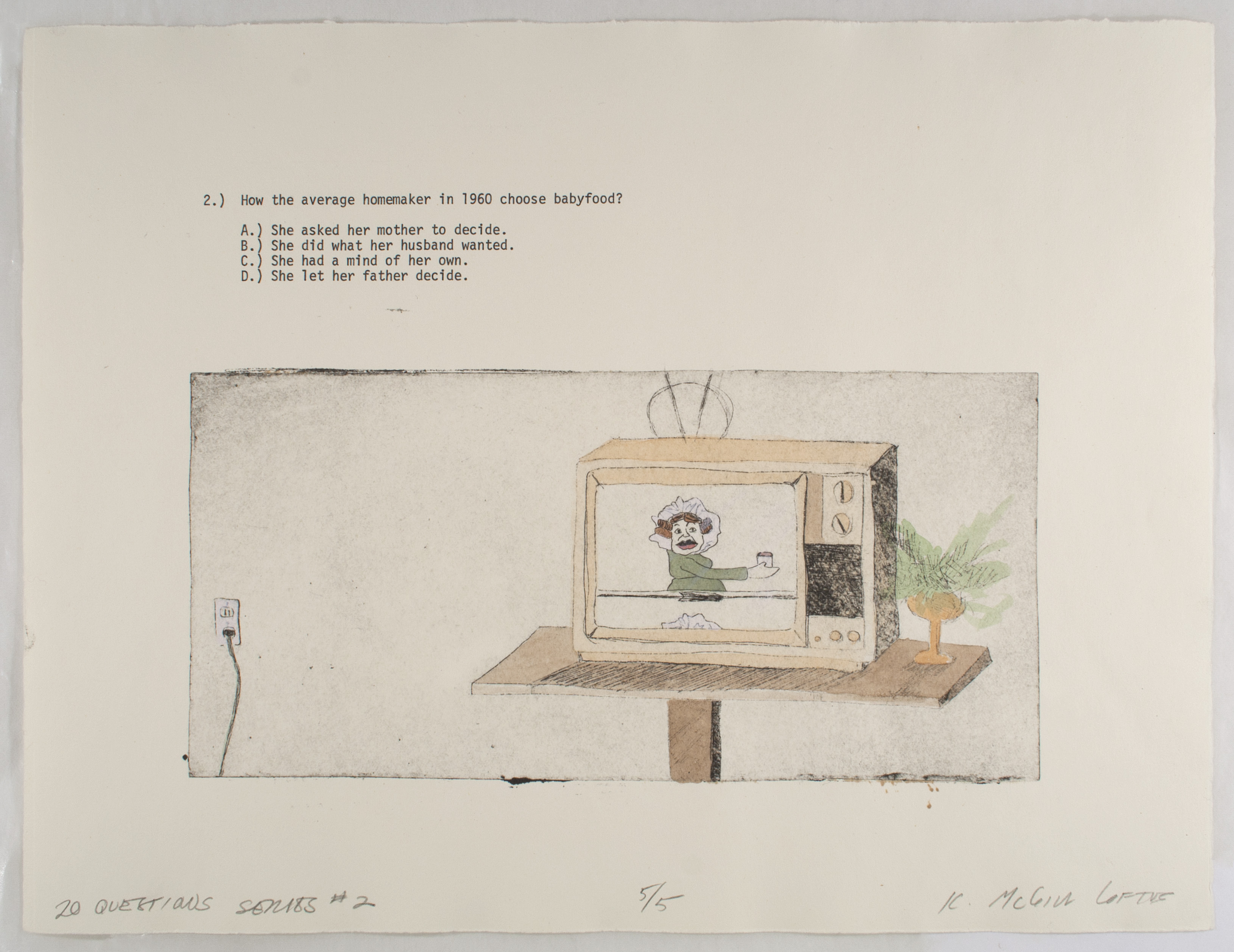 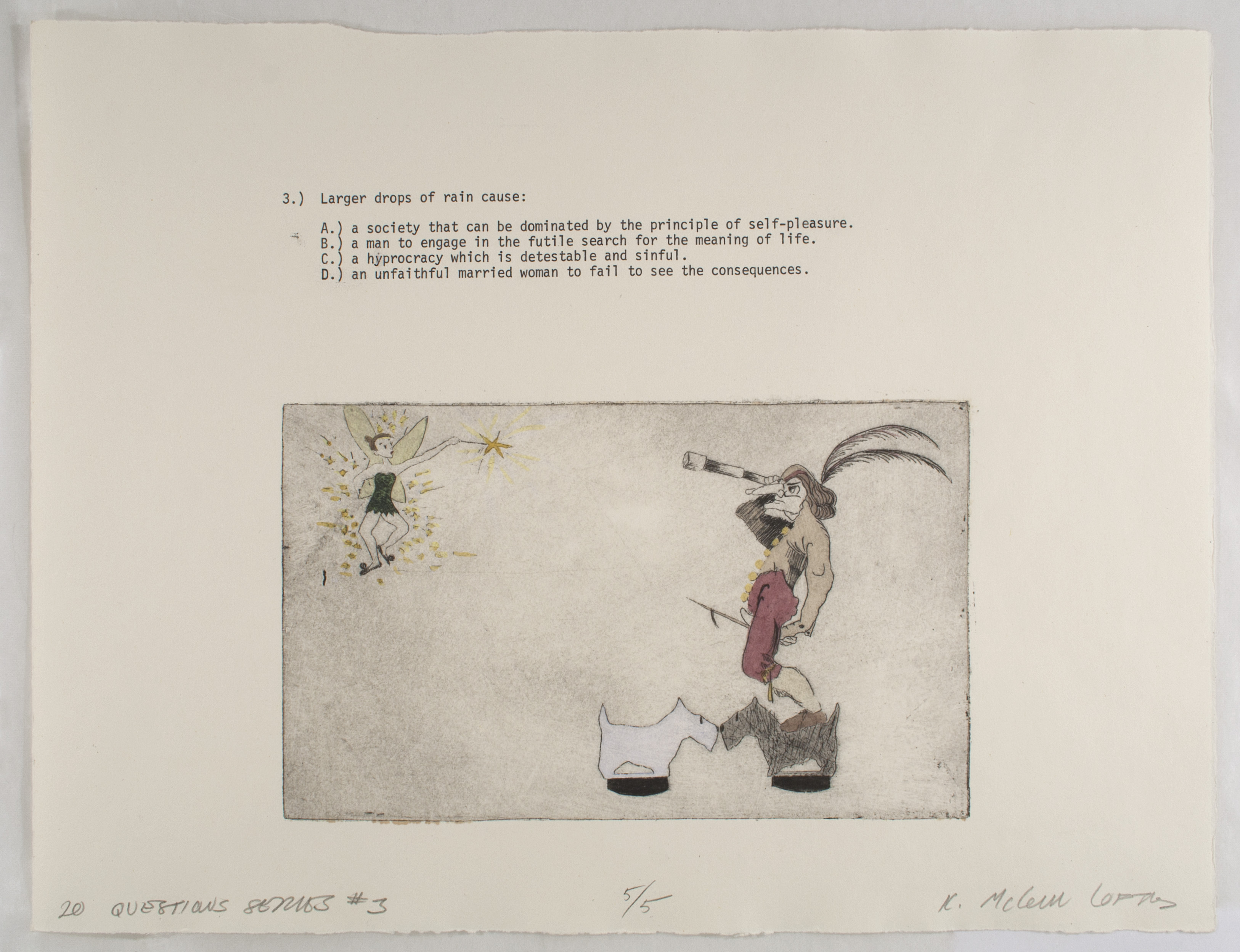 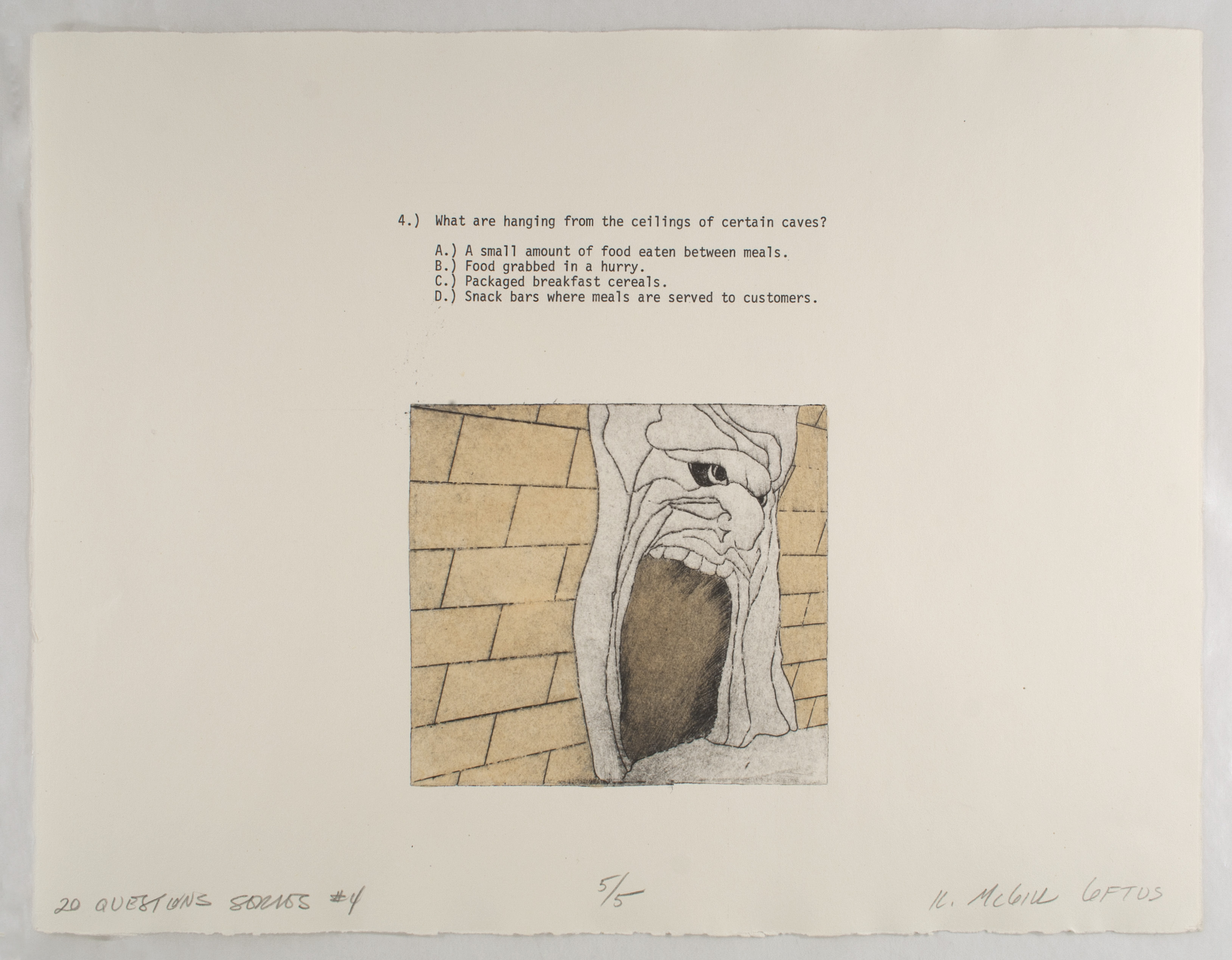 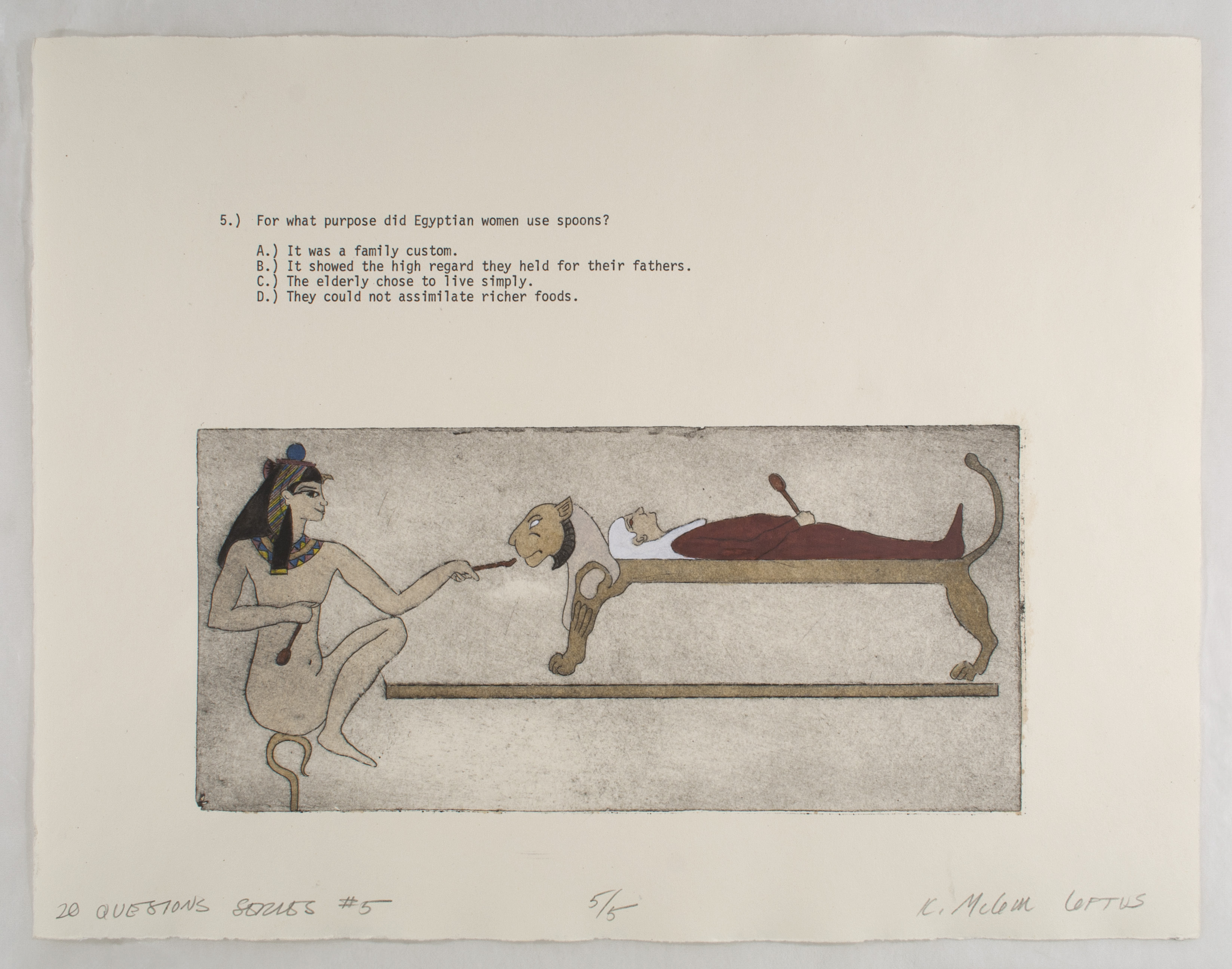 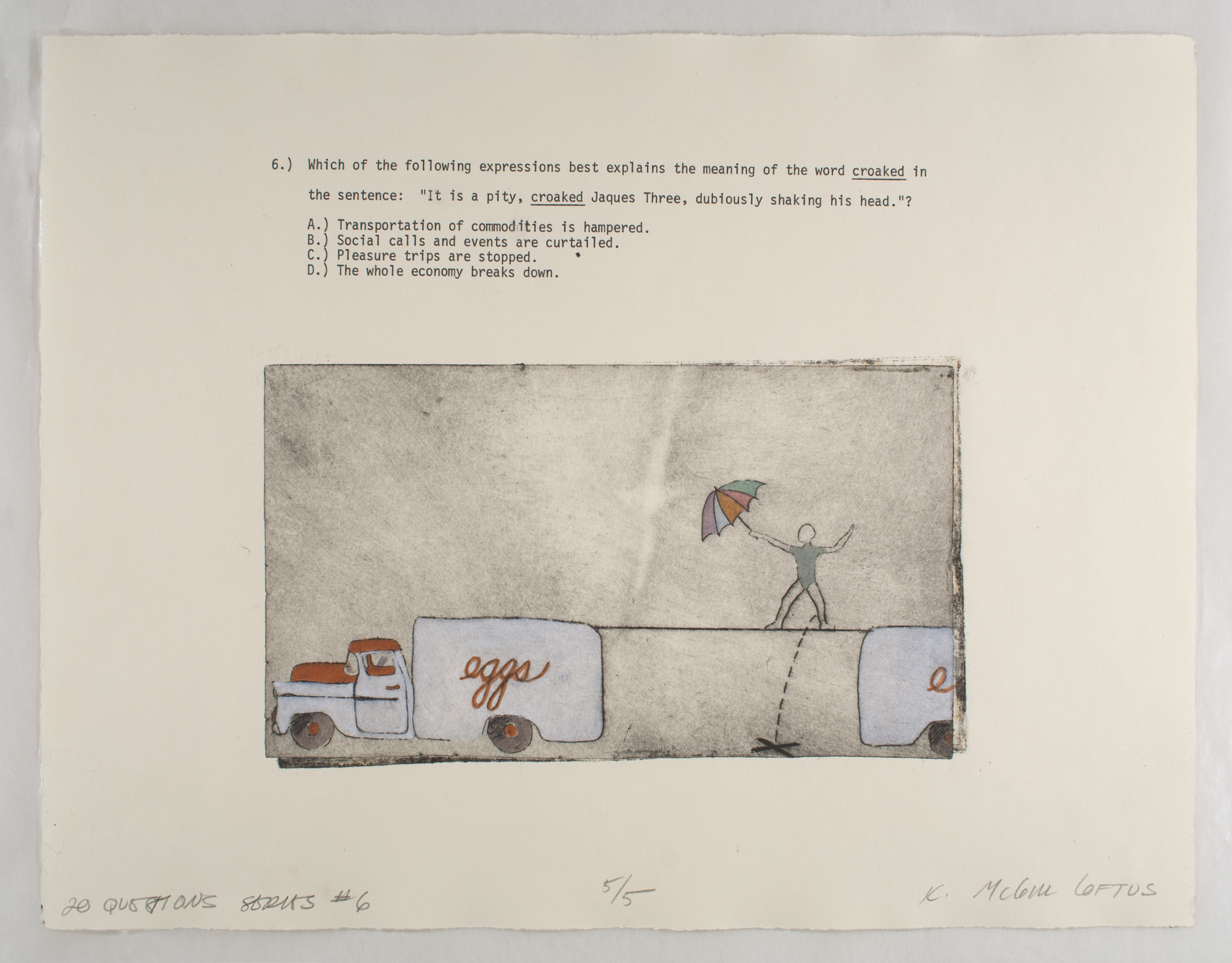 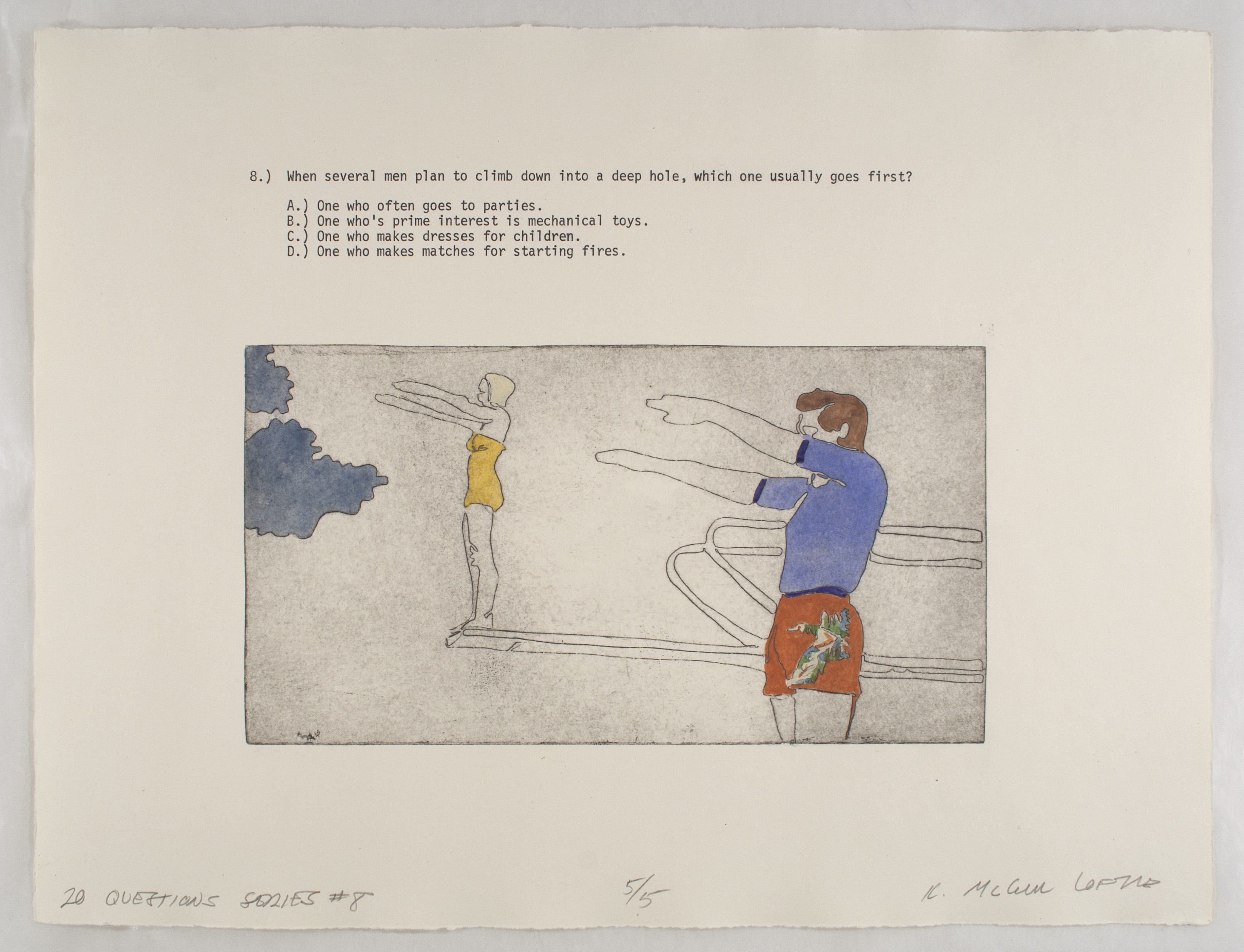 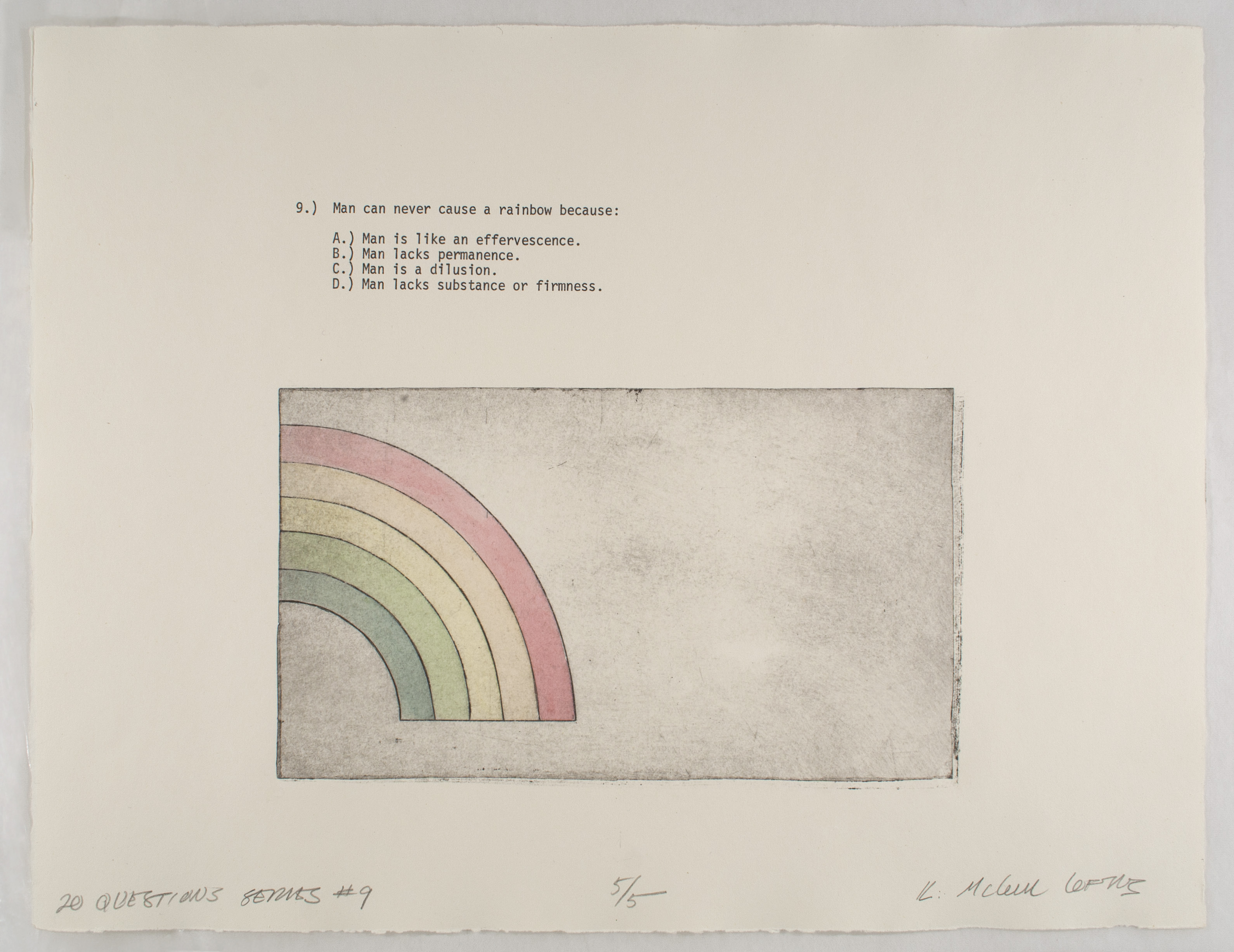 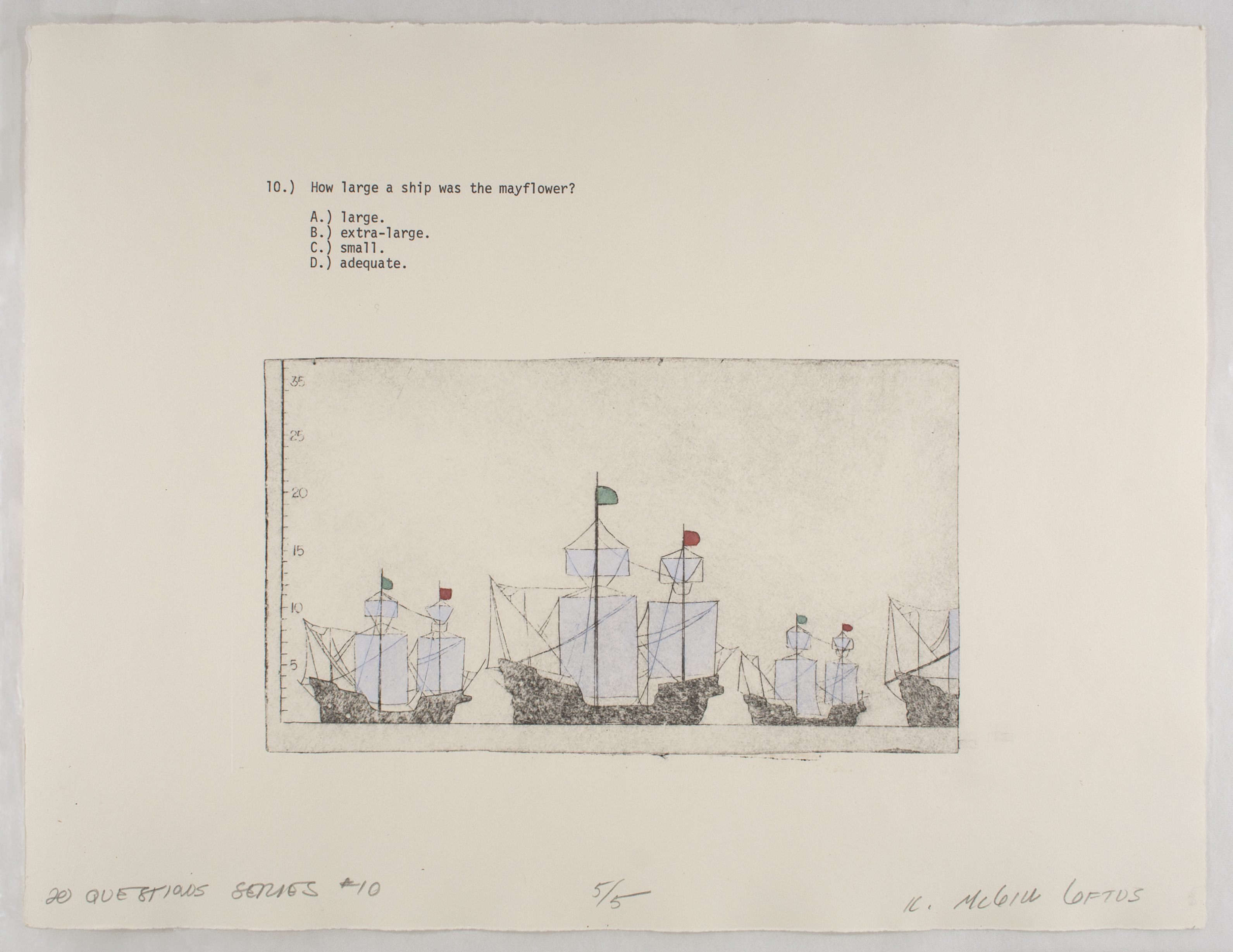 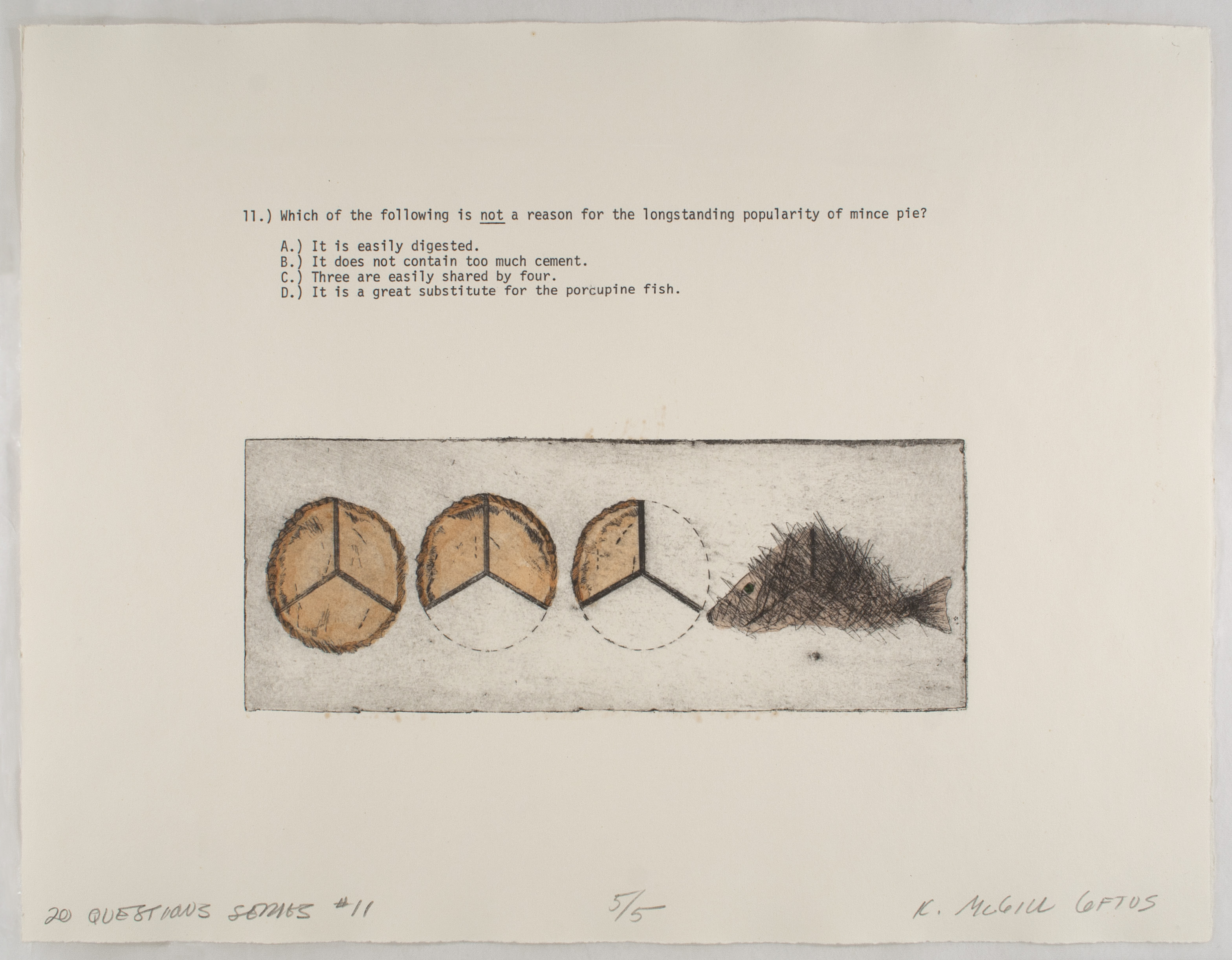 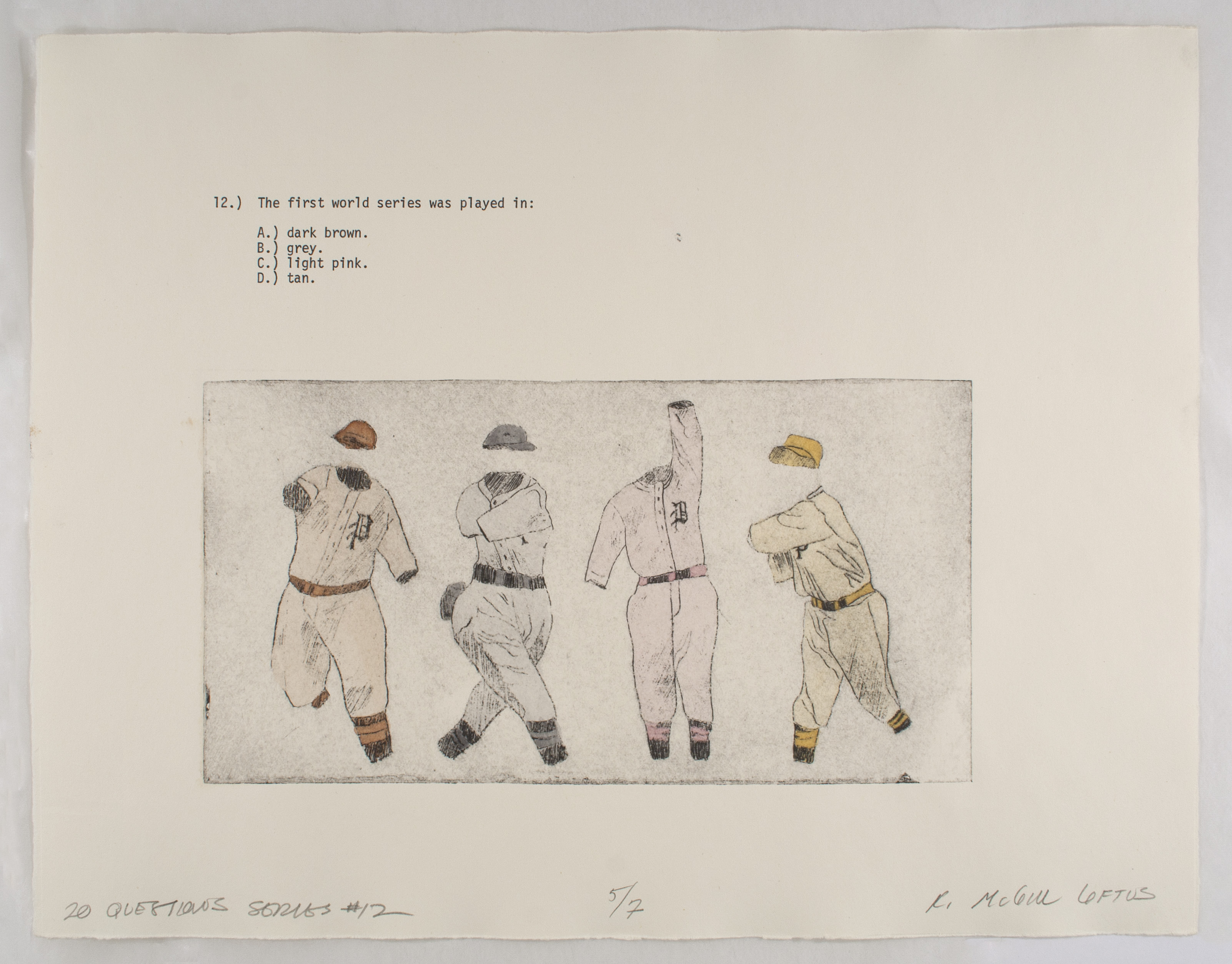 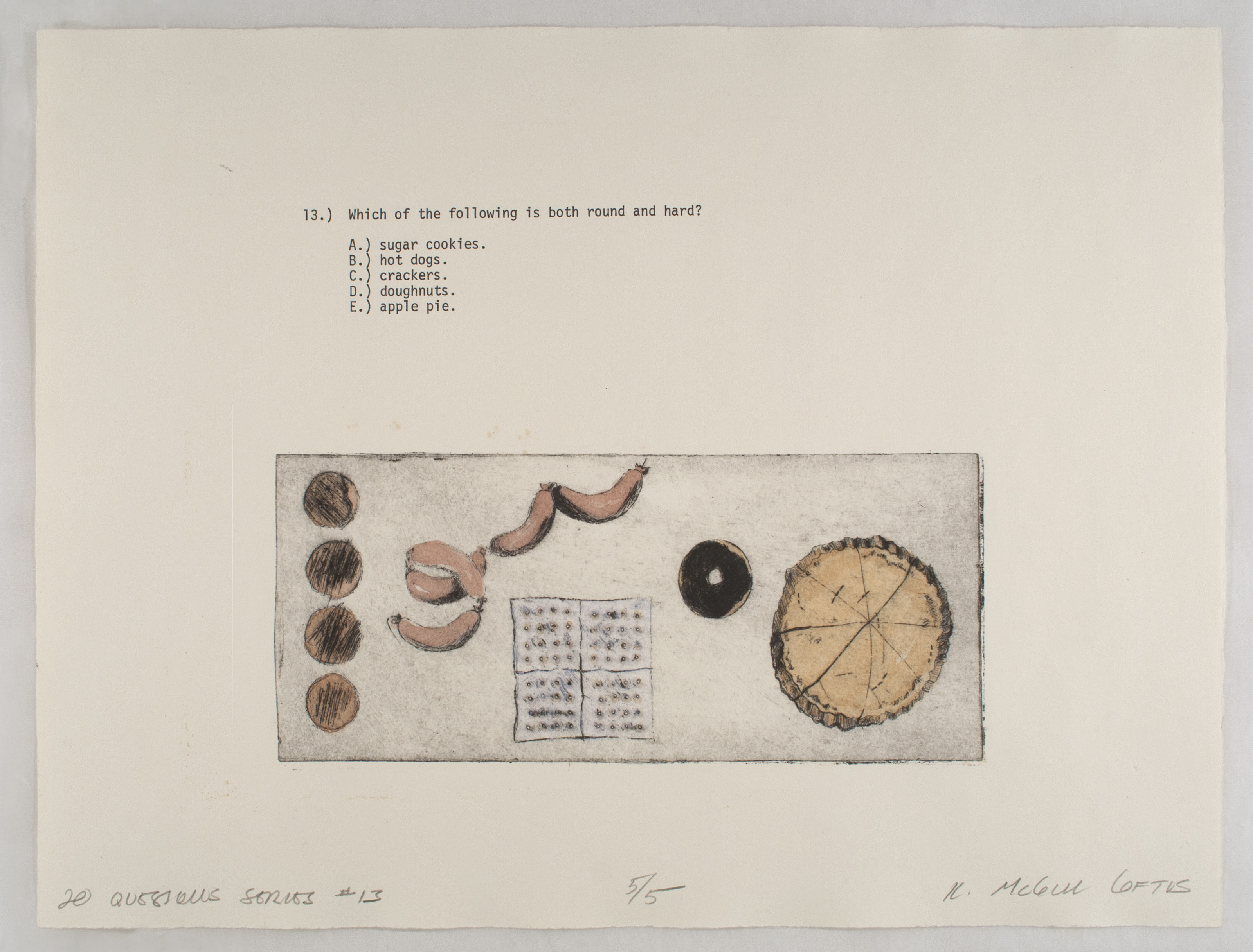 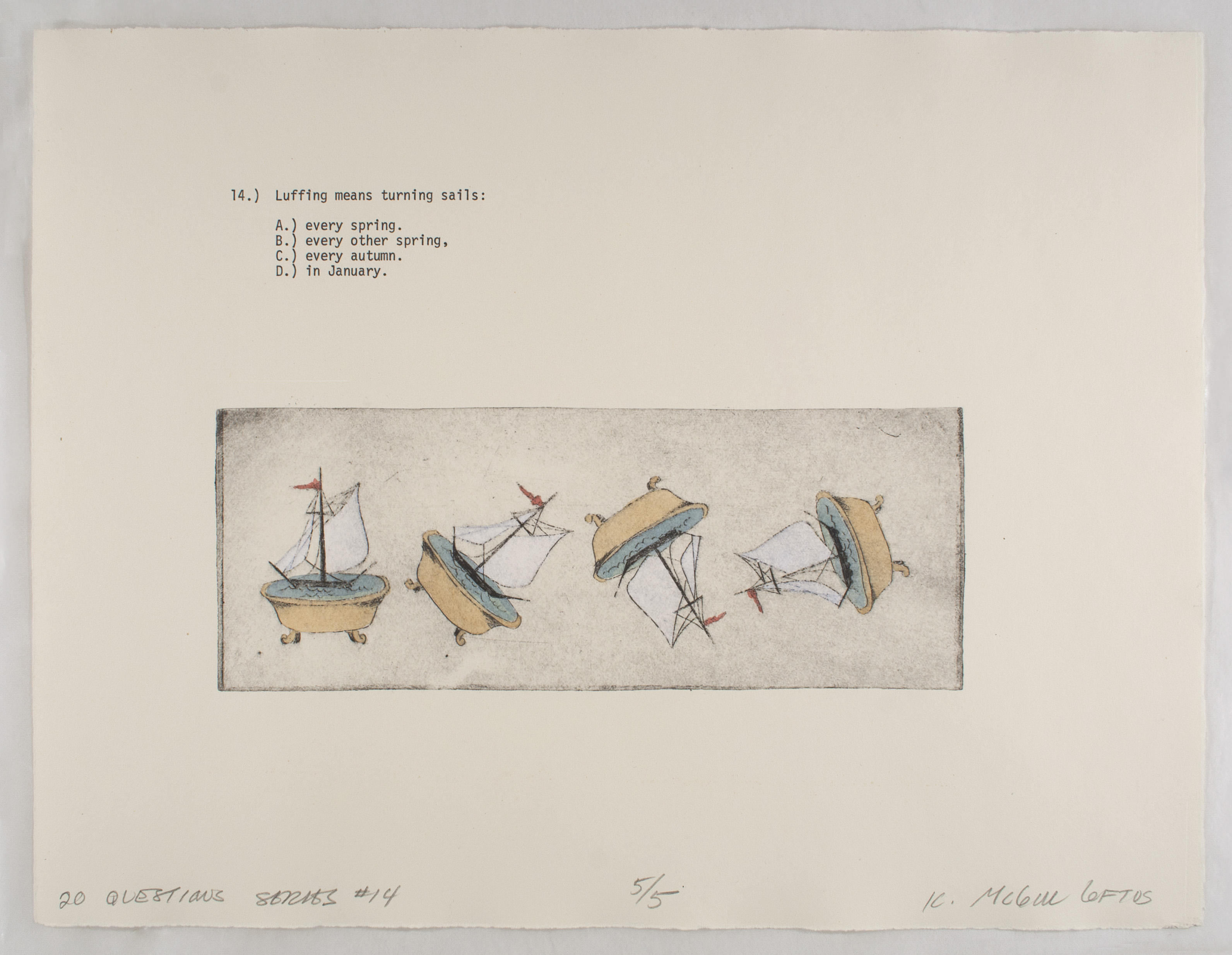 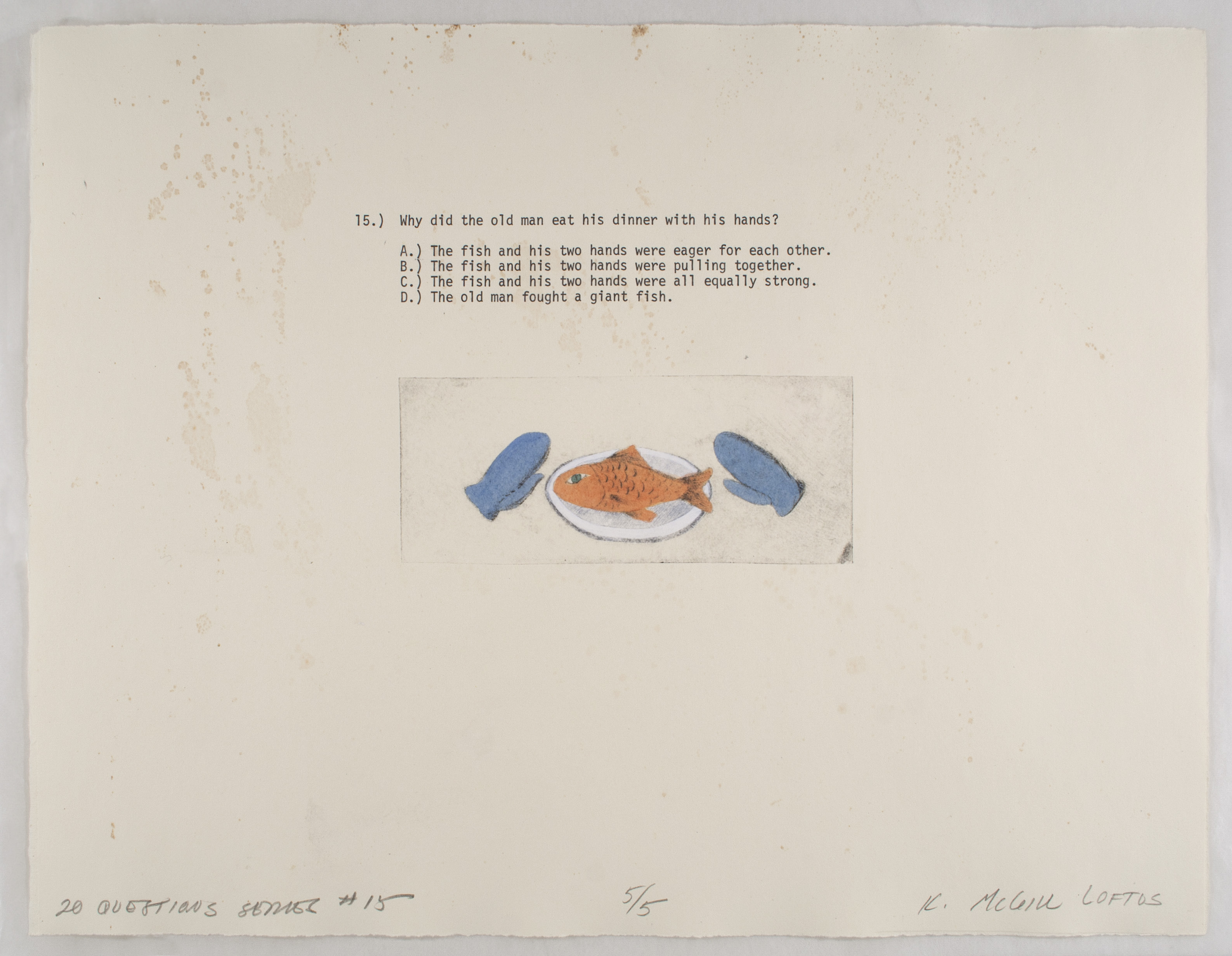 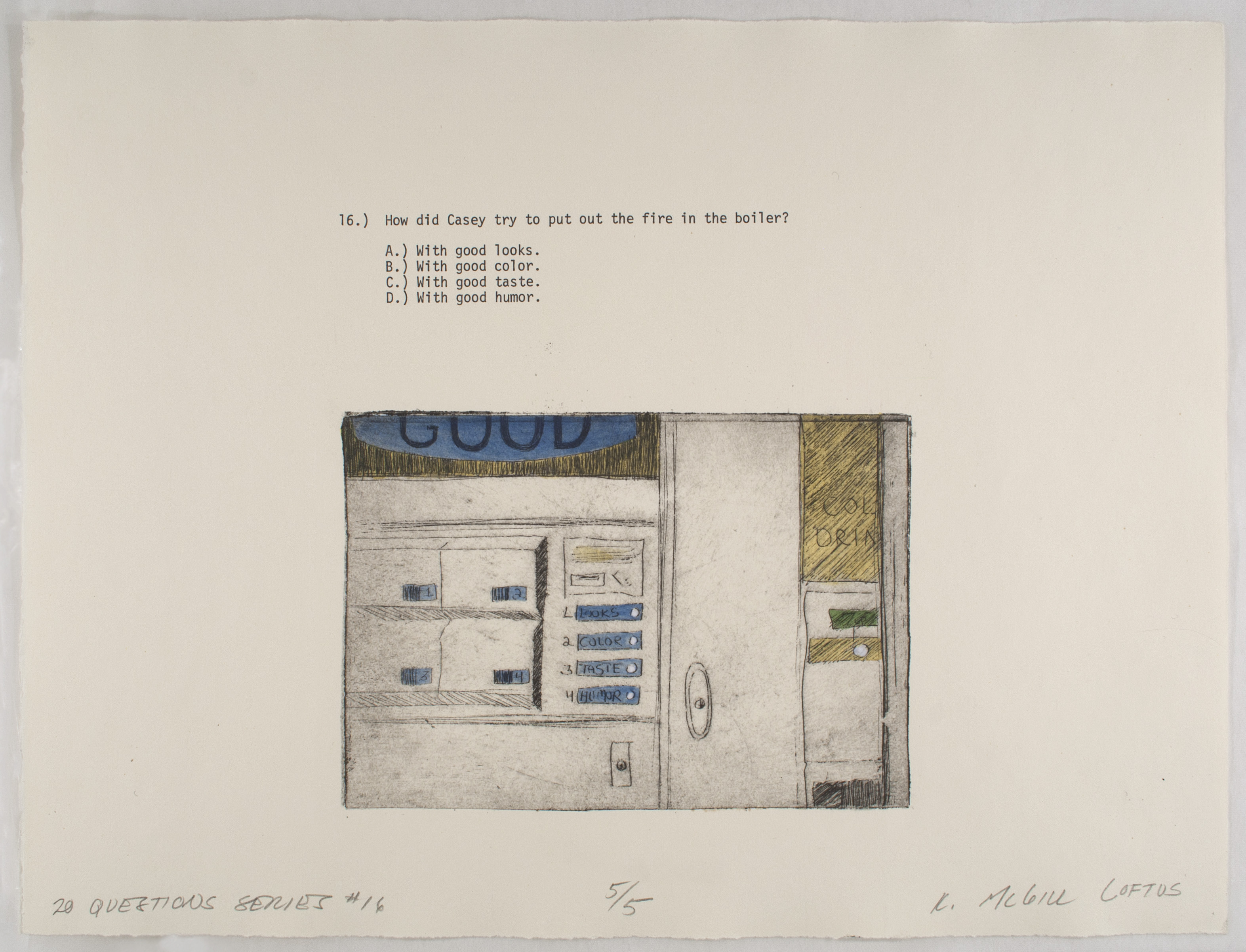 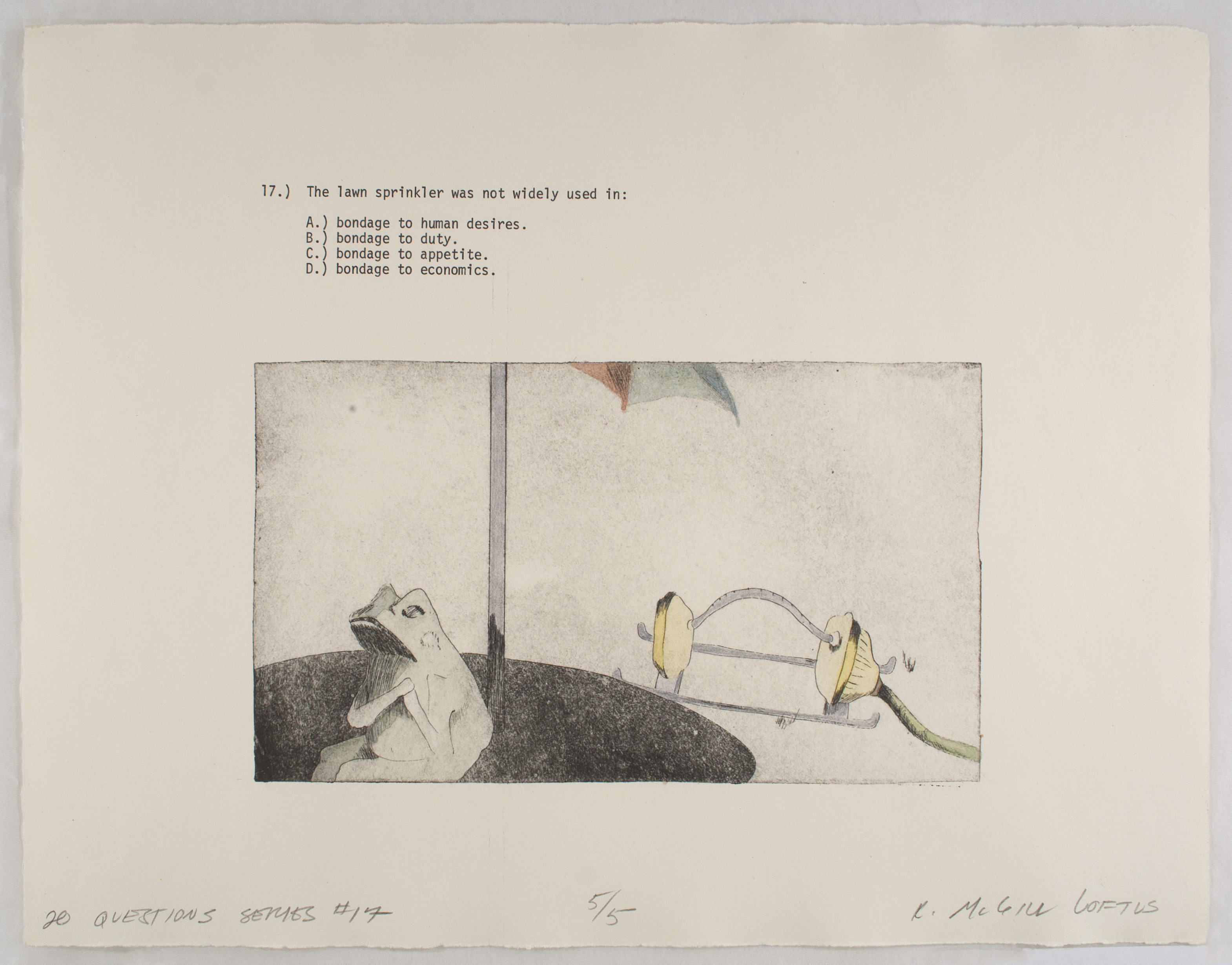 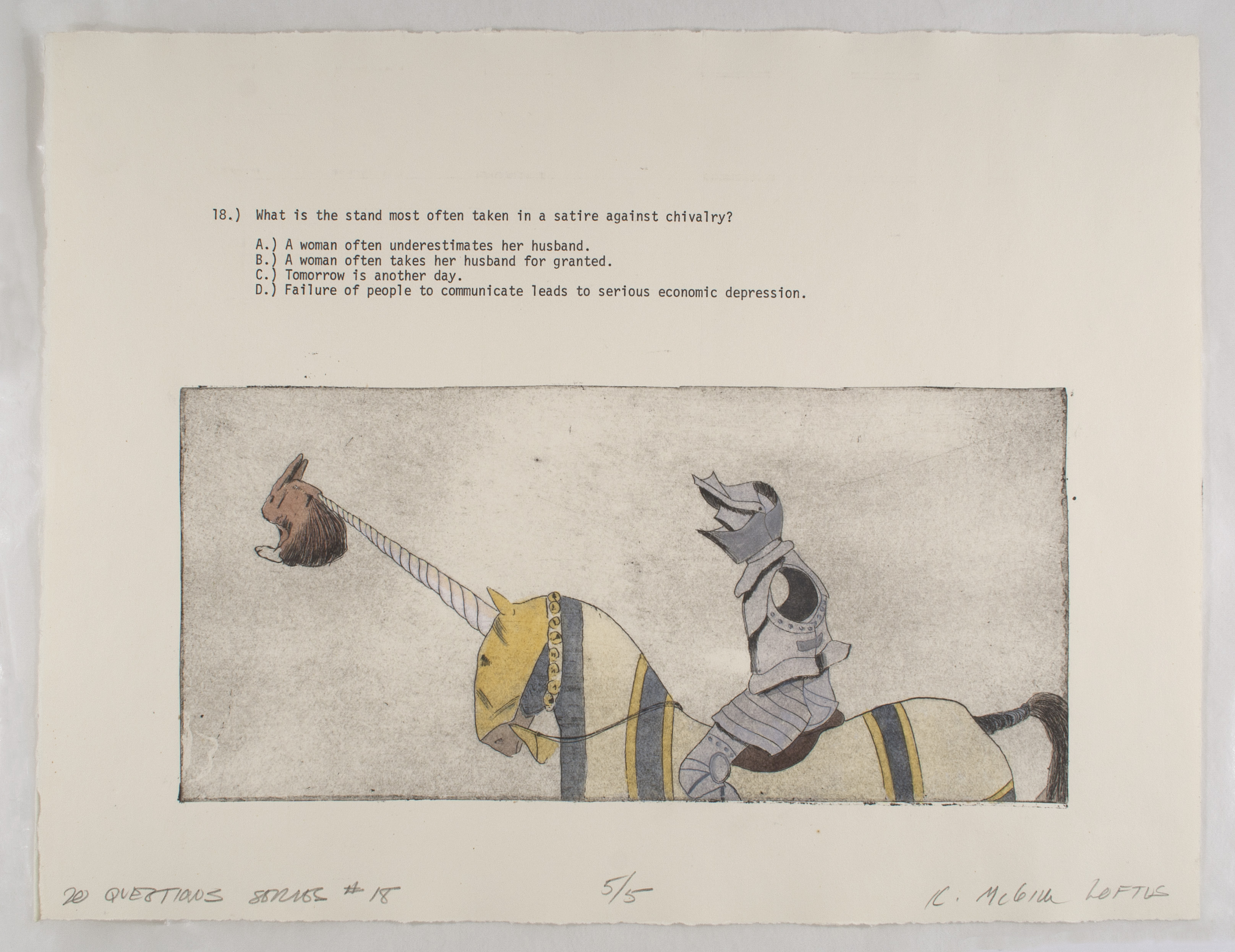 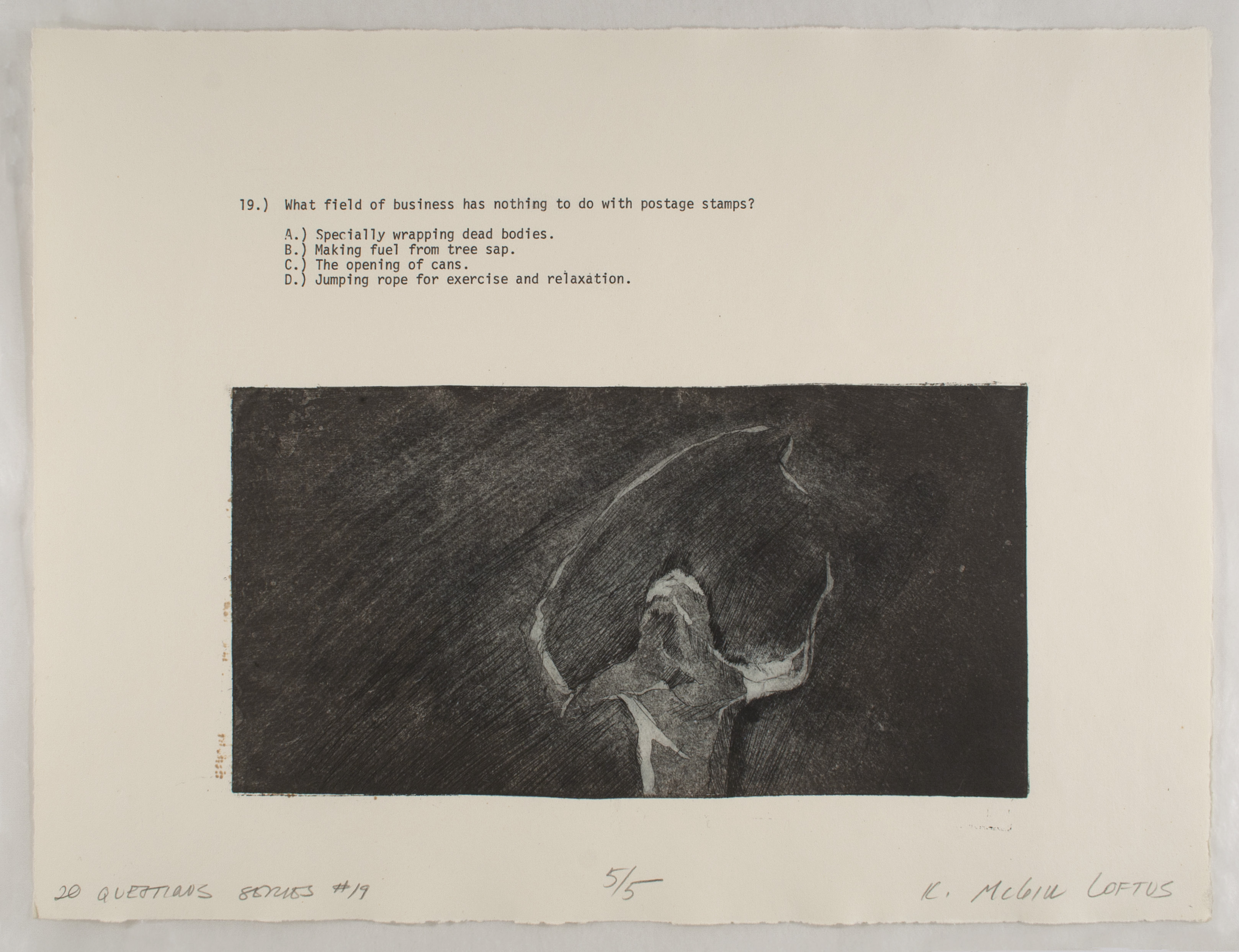 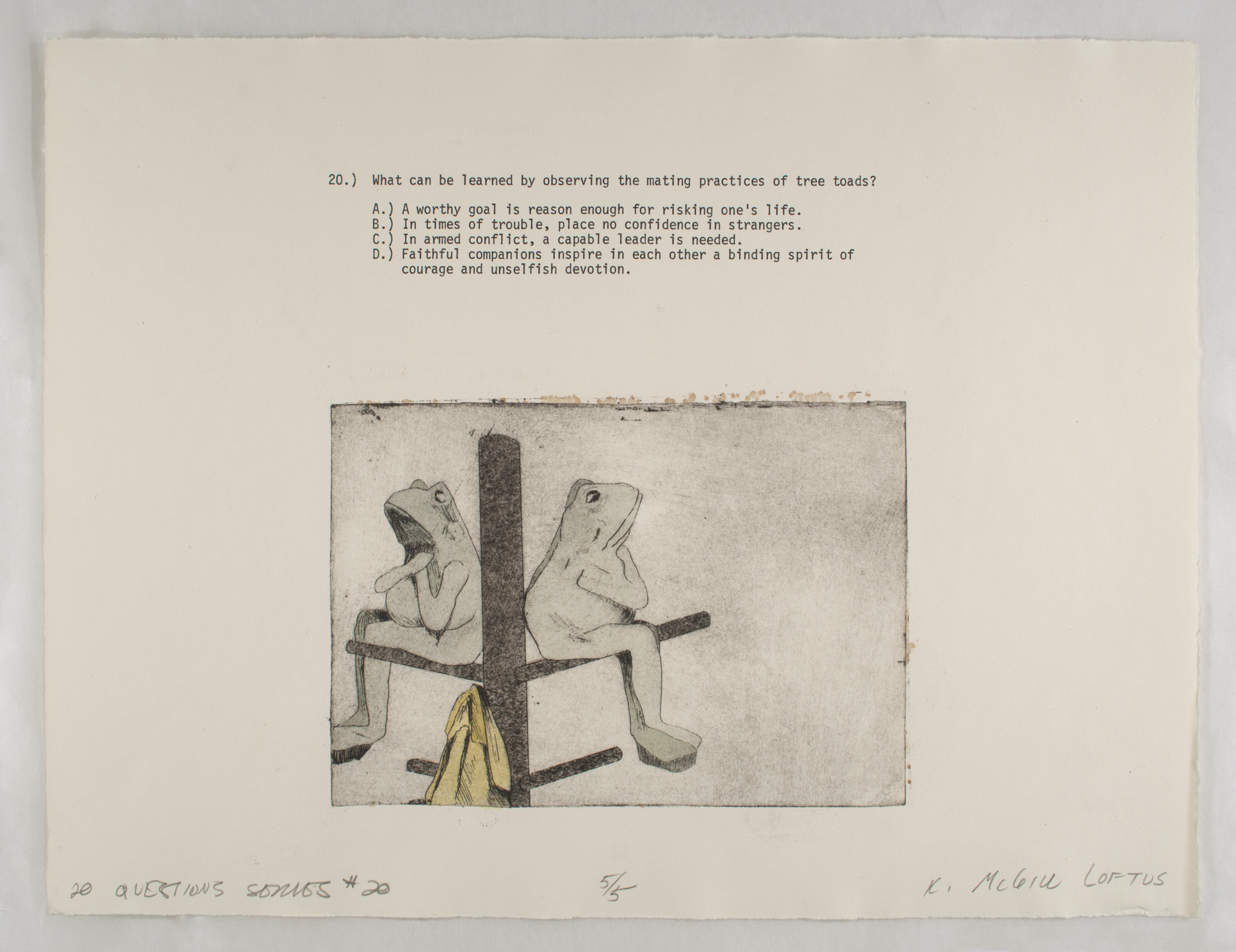 K. McGill Loftus. Sounds like a made-up name. The Collector’s database reports that he bought 20 Questions Series on November 18, 1959. He does not remember the purchase or the artist.

K. McGill Loftus could be an answer to a game of 20 Questions.

The computer turns up many a Loftus but no K. McGill. Absent the artist, we do have the art.

20 Questions is a parlor game—does anyone still use the word parlor?—also employed to amuse children on long car rides. Wikipedia says it was invented in the 1940s, which makes sense, because there were a lot more cars after World War II and thus a lot more bored and annoying children in their back seats. The game had to be current when K. McGill made this series for the joke to work. It is a mild, non sequitur joke, meant, I suppose, to animate the art and vice versa. A few of the questions call to mind the art of Glen Baxter but lack his punch.

The series is a meeting of art and idea, often an uneasy relationship. Number 12 is my favorite. As a baseball fan, I love paper doll uniforms and can easily imagine myself in all of them.

In every large collection there must be a Loftus, a forgotten artist. What did the Collector see in this work?

A guess: he has always loved a series.

K. McGill Loftus was active during the mid-twentieth century. If you have any further information on this artist, please contact us.
William Corbett Biography
William Corbett (b. 1942, Norfolk, VA) is a poet and memoirist who lives in Brooklyn. He teaches writing at the Massachusetts Institute of Technology, Cambridge, Massachusetts. He has published books on the painters Philip Guston and Albert York, and has edited the letters of the poet James Schuyler. Corbett directs the small press, Pressed Wafer. Hanging Loose Press published his book of poems entitled The Whalen Poem (2011).

Stephanie Brody-Lederman’s one-of-a-kind book, Mothers—Thorny Subjects (1978), is a primer on motherhood. Like all primers we are meant to learn a thing or two, for example our A-B-Cs, while absorbing a lesson that might serve us well in later life. Brody-Lederman’s book is dedicated to her children, but after years of motherhood she now thinks her book has as much to say to and about her.

Brody-Lederman writes small stories in stick figures. This is not where the moral of this primer is, if there is one. Thorny twigs have been sewn to the pages. Mothers build nests and come to know that they are not all down and comfort. Mothers are adept with needle and thread, to mend what needs mending. And if thread binds in a restrictive way…well, that’s one of the ways Mom can be a thorny subject.

Stephanie Brody-Lederman (b. 1939, New York, NY) earned her BS in Design at Finch College, New York (1961), and received her MA in Painting from Long Island University, Greenvale, New York (1975). She was presented with the Jessica Cosgrave Award (2010) for distinguished alumna of Finch College. Recent solo exhibitions have been held at the Islip Art Museum, East Islip, New York (2007); OK Harris Gallery, New York (2009, 2012); the lobby of 1133 Sixth Avenue, New York (2010); the Hudson Opera House, Hudson, New York (2010); and The Forge Gallery, Milford, Pennsylvania (2012). Recent group exhibitions have been held at Guild Hall, East Hampton, New York (2009); Central Booking, Brooklyn (2010); Projective City, Paris (2012); and the Southampton Cultural Center, Southampton, New York (2012). Brody-Lederman’s work has been reviewed in Art in America, The Brooklyn Rail, ARTnews and Artforum, and has been featured as the cover of The Paris Review #160 and L’OEIL. A chapbook of her work, featuring an essay by Edward M. Gomez, was produced (2011). Two of her poems were published in the St. Petersburg Review 4/5 (2012). Brody-Lederman lives and works in New York City and Paris. More information about her work can be found at www.stephaniebrodylederman.com.
William Corbett Biography
William Corbett (b. 1942, Norfolk, VA) is a poet and memoirist who lives in Brooklyn. He teaches writing at the Massachusetts Institute of Technology, Cambridge, Massachusetts. He has published books on the painters Philip Guston and Albert York, and has edited the letters of the poet James Schuyler. Corbett directs the small press, Pressed Wafer. Hanging Loose Press published his book of poems entitled The Whalen Poem (2011).