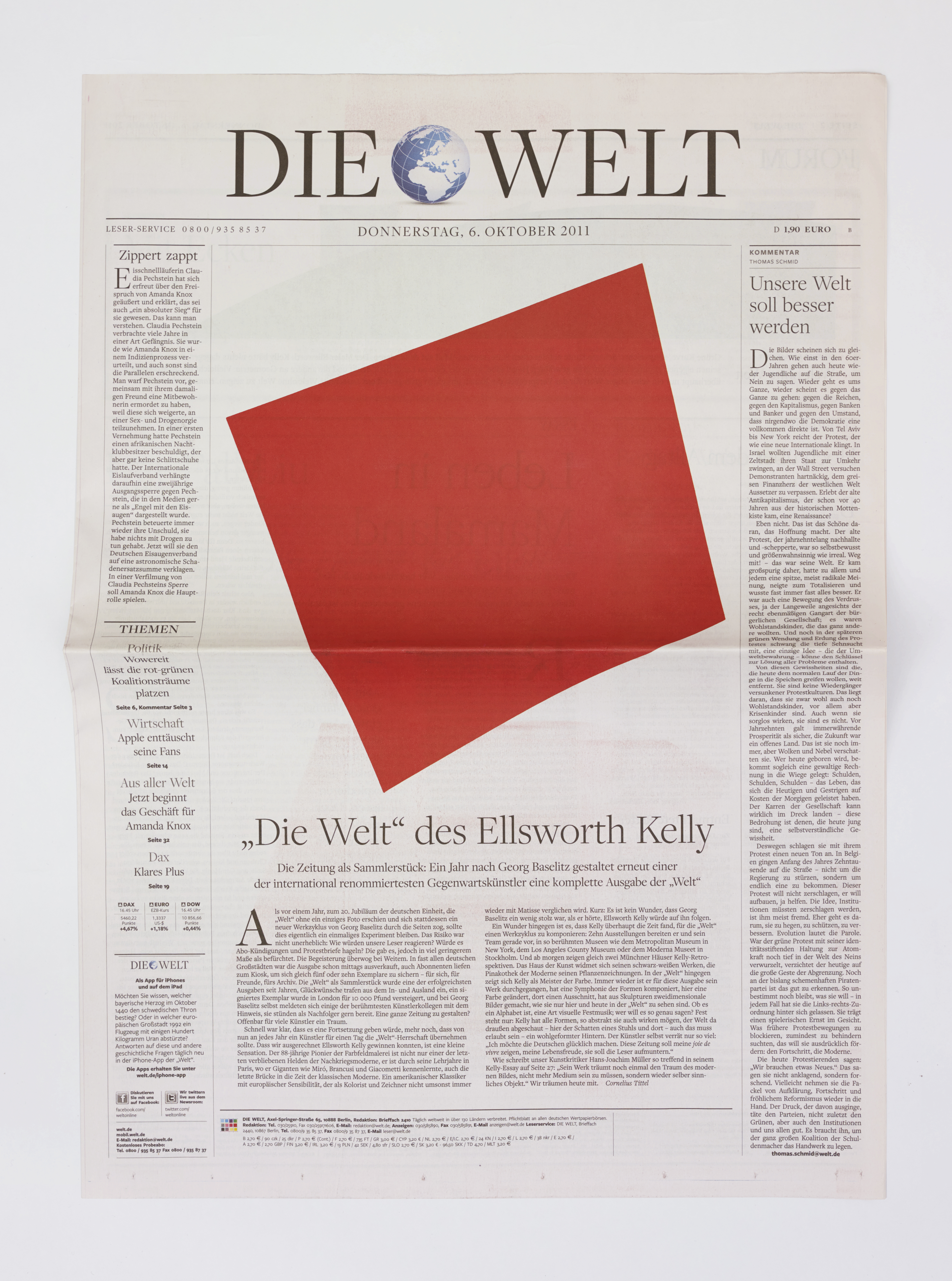 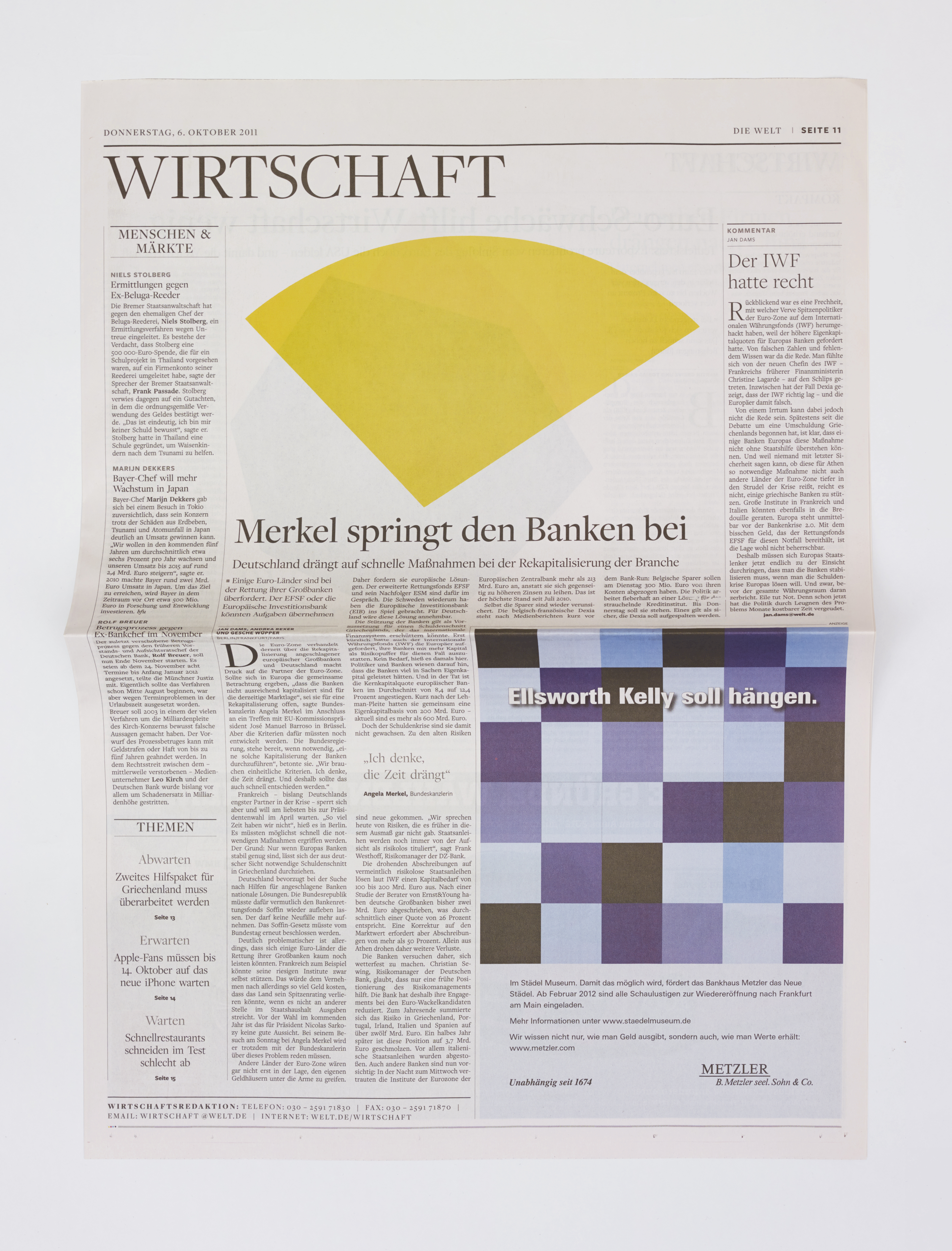 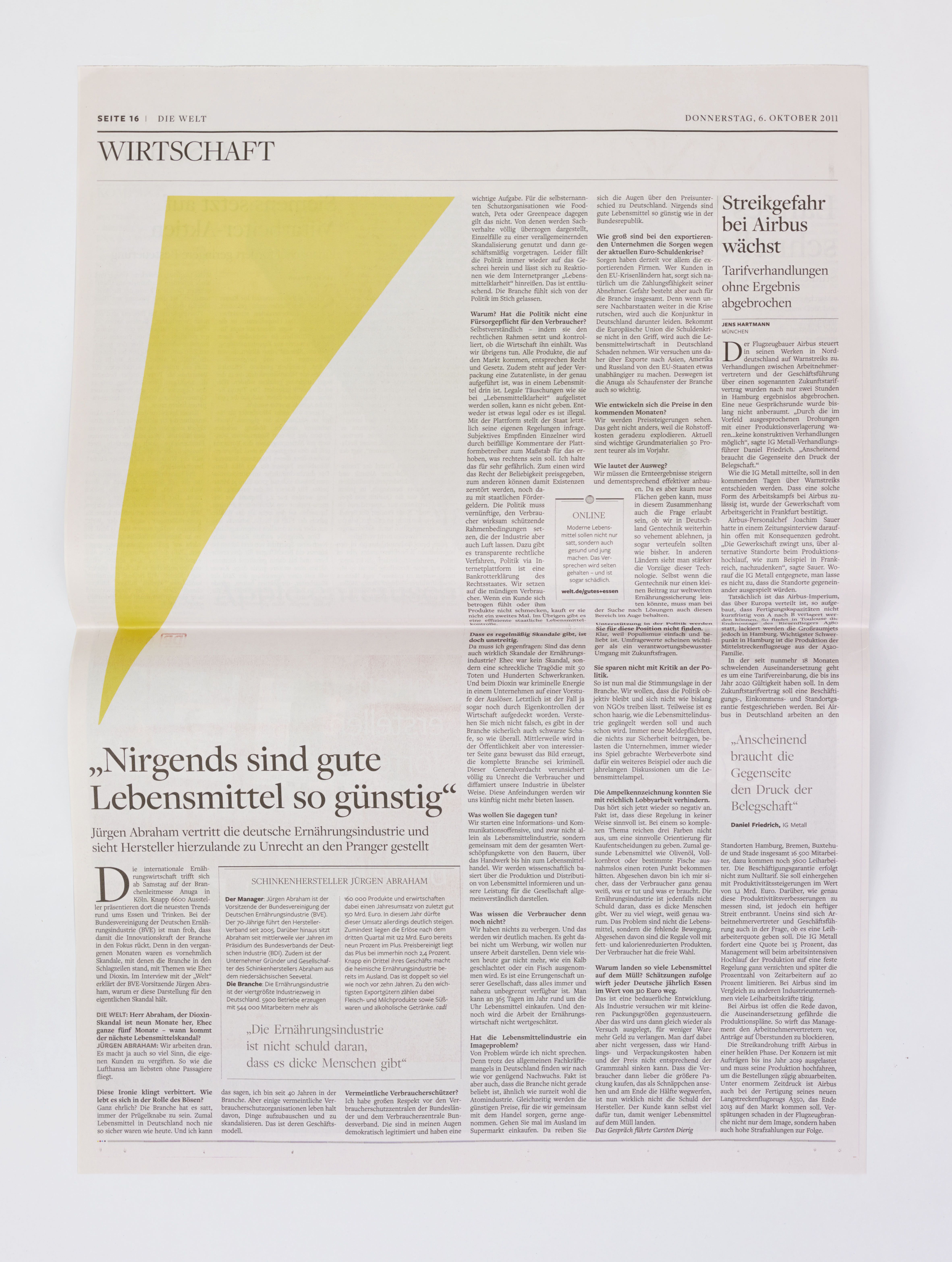 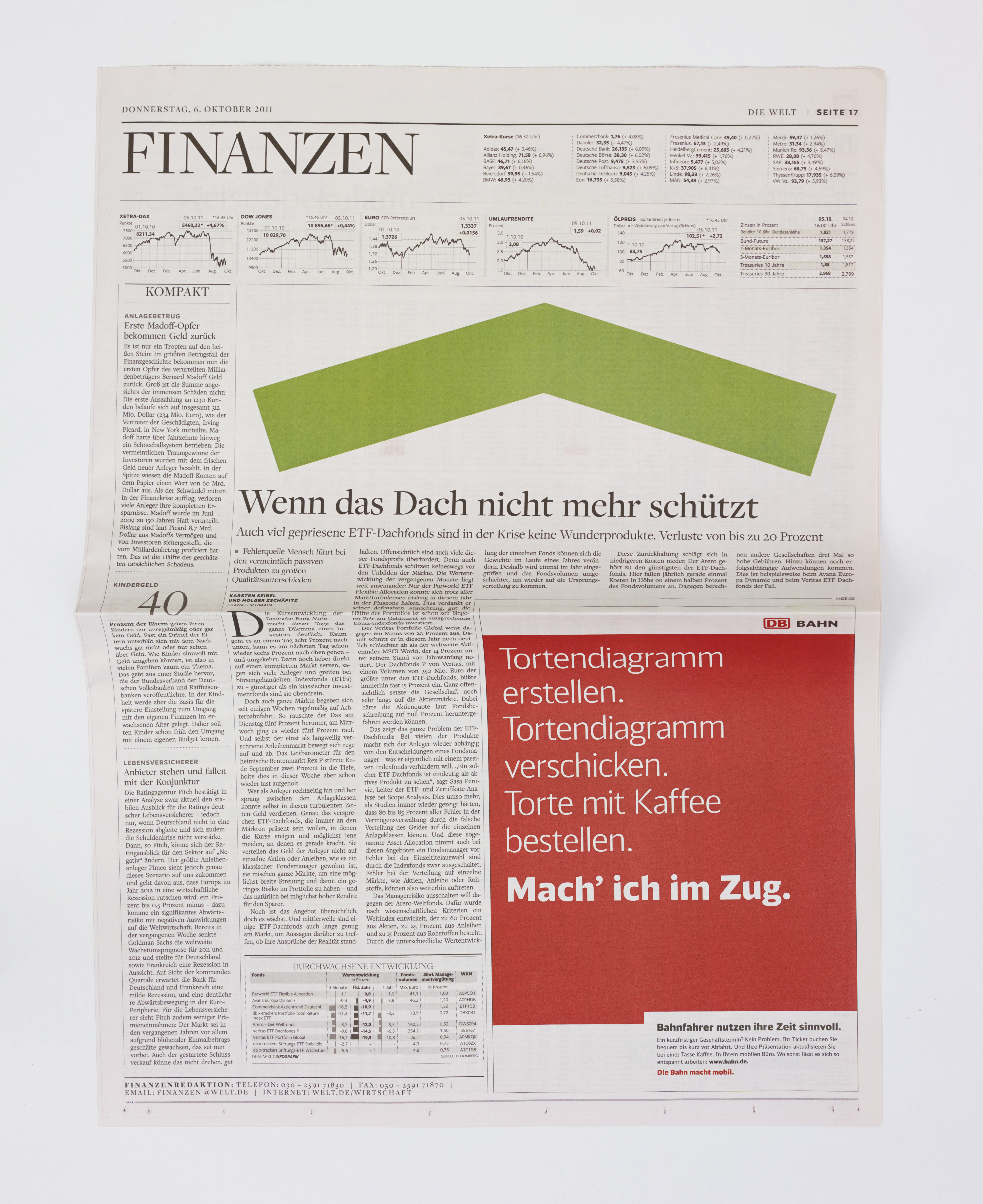 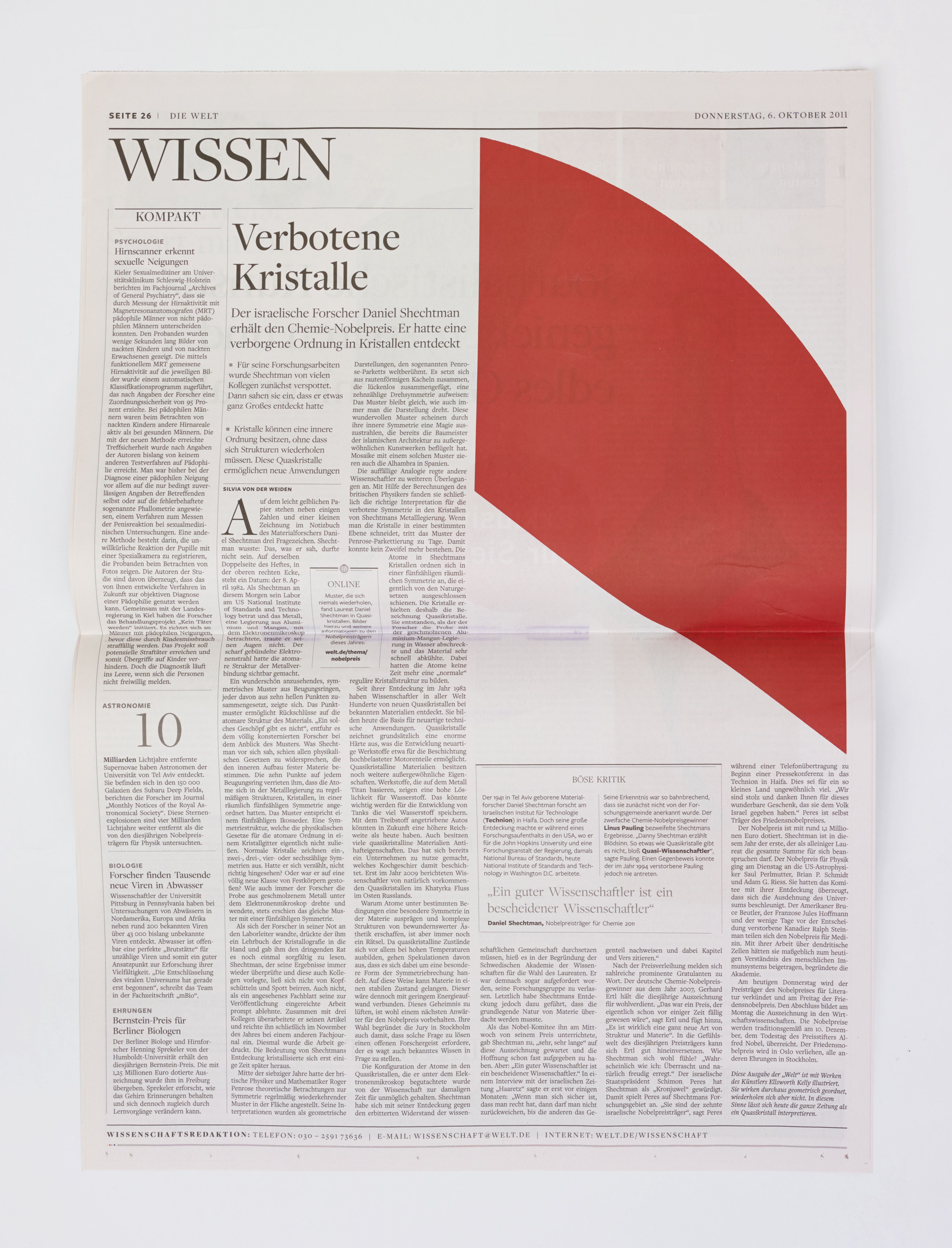 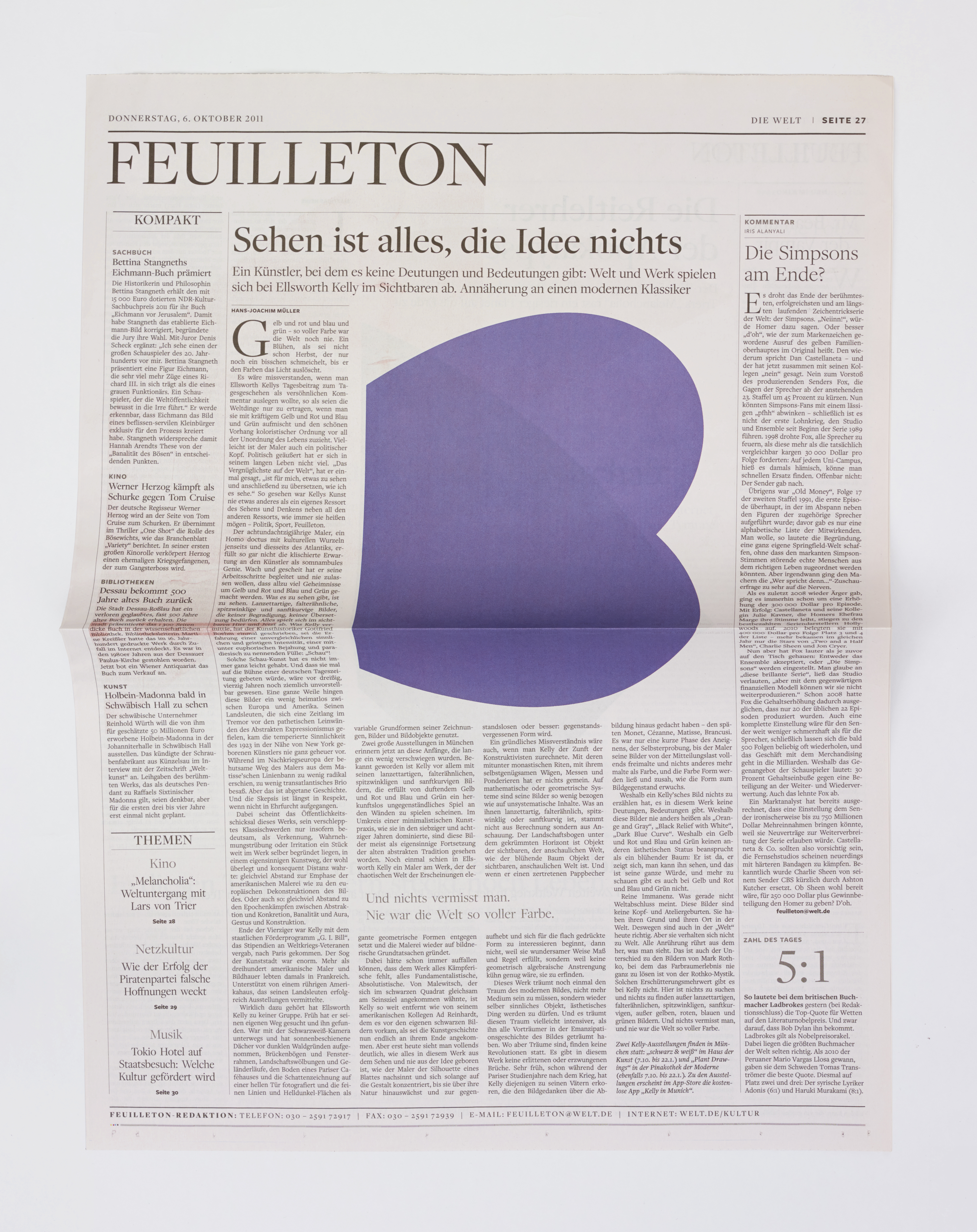 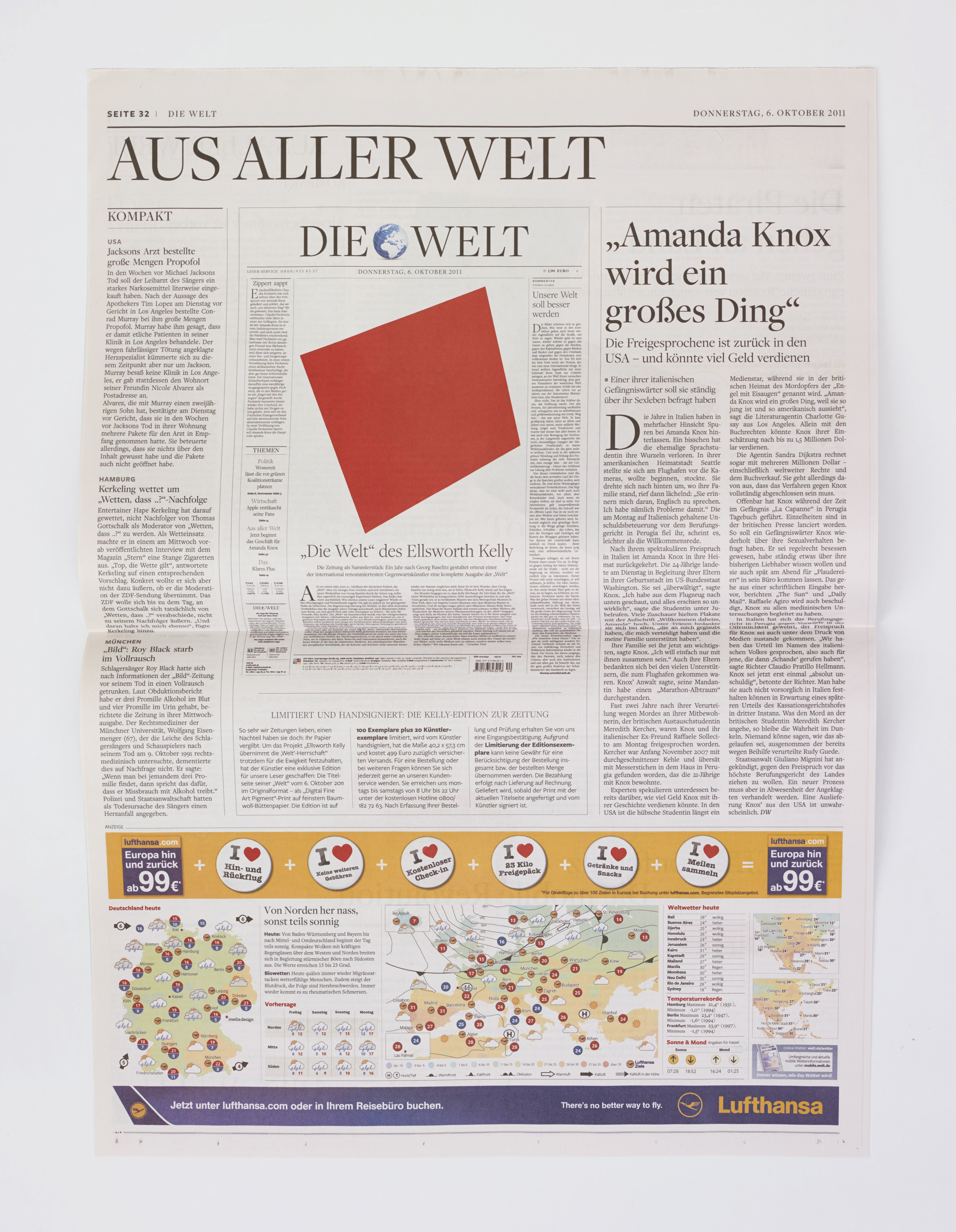 Ellsworth Kelly is famous for his work in hard-edge abstraction: primarily large shapes, often but not exclusively sculptural, sporting one uniform color surface—or sometimes two colors on adjacent shapes, which almost touch but never do. Hard-edge abstraction, in Kelly’s vernacular, is surprisingly sensual. The tension between a single color field and a wall, or between two sculptural shapes, suggests proximity with a prohibition against actual touching.

As part of a series organized by Die Welt, the leading conservative German newspaper, Kelly designed an edition of the paper to feature his signature abstract shapes where readily digestible photojournalistic images would usually be found. Images found in newspapers are customarily in conversation with text, often glimpsed as supplements rather than examined on their own. Photojournalism, however, is uniquely situated as the practice of capturing a precise moment and telling a story without words—an important component of reportage that, in daily periodicals such as Die Welt, might otherwise go unnoticed. Kelly’s intervention challenges the relationship between image and text in a specific context, while also raising questions about the ability of abstract art to speak directly to experience.

Unlike other queer artists of his generation, such as Robert Rauschenberg and Robert Indiana, who routinely incorporate language into their work, Kelly leaves his surfaces devoid of legible words or recognizable images. This marked absence gestures toward Kelly’s acute awareness of the risks taken in suggesting sexuality in his work, and this awareness serves as one explanation for his according decision to avoid suggestion wholesale. But in Die Welt, Kelly quite consciously brings his images into play with text, suggesting that his work need not contain words or pictures in order to speak volumes about society.

In placing abstract forms where we expect to find illustrative images, Kelly asks the viewer to consider how form, line, and color might resonate with people, and how it might formulate the information we use each day to understand one another and to make ourselves understood.

Ellsworth Kelly (b. 1923, Newburgh, NY) is regarded as one of the most important abstract painters, sculptors and printmakers working today. His career is marked by the independent route his art has taken from any formal school or art movement, and by his innovative contribution to 20th century painting and sculpture. Following two years of study at the Pratt Institute, Brooklyn, New York (1941-1942), Kelly served in the United States Army during World War II, and then resumed his education at the Boston Museum School (1946-1948). Kelly’s first one-man exhibition was at the Galerie Arnaud, Paris (1951). In recognition of his lifetime achievements and contributions, Kelly was promoted to Officier of the French Legion by the French Consulate. His first major retrospective exhibition was held at The Museum of Modern Art, New York (1973), followed by retrospectives at The Metropolitan Museum of Art, New York (1979); the Whitney Museum of American Art, New York (1982); and the Solomon R. Guggenheim Museum, New York (1996). Kelly’s works have been exhibited in conjunction with artists such as Cézanne and Beyond, the Philadelphia Museum of Art, Pennsylvania (2009); Monet and Abstraction, the Museo Thyssen-Bornemisza, Madrid (2009); Jean Auguste Dominique Ingres / Ellsworth Kelly, the Villa Medici’s Académie de France, Rome (2010); and Malevich and the American Legacy, Gagosian Gallery, New York (2011). Recent solo exhibitions were held in 2013 at The Phillips Collection, Washington, D.C.; The Museum of Modern Art, New York; Matthew Marks Gallery, New York; The Barnes Foundation, Philadelphia; Mnuchin Gallery, New York; and the Madison Museum of Contemporary Art, Madison, Wisconsin, traveling to Detroit Institute of Arts, Michigan. He lives and works in upstate New York.
Cat Dawson Biography
Cat Dawson is a doctoral candidate (ABD) in Visual Studies at the University at Buffalo specializing in art of the American post-war postmodern. Her particular interests include the interplay between text and language, conceptual art and theories of the body, mid-century painting and the sexuality of abstraction, and psychoanalysis. Her dissertation is on sexuality and difference in American post-war painting.