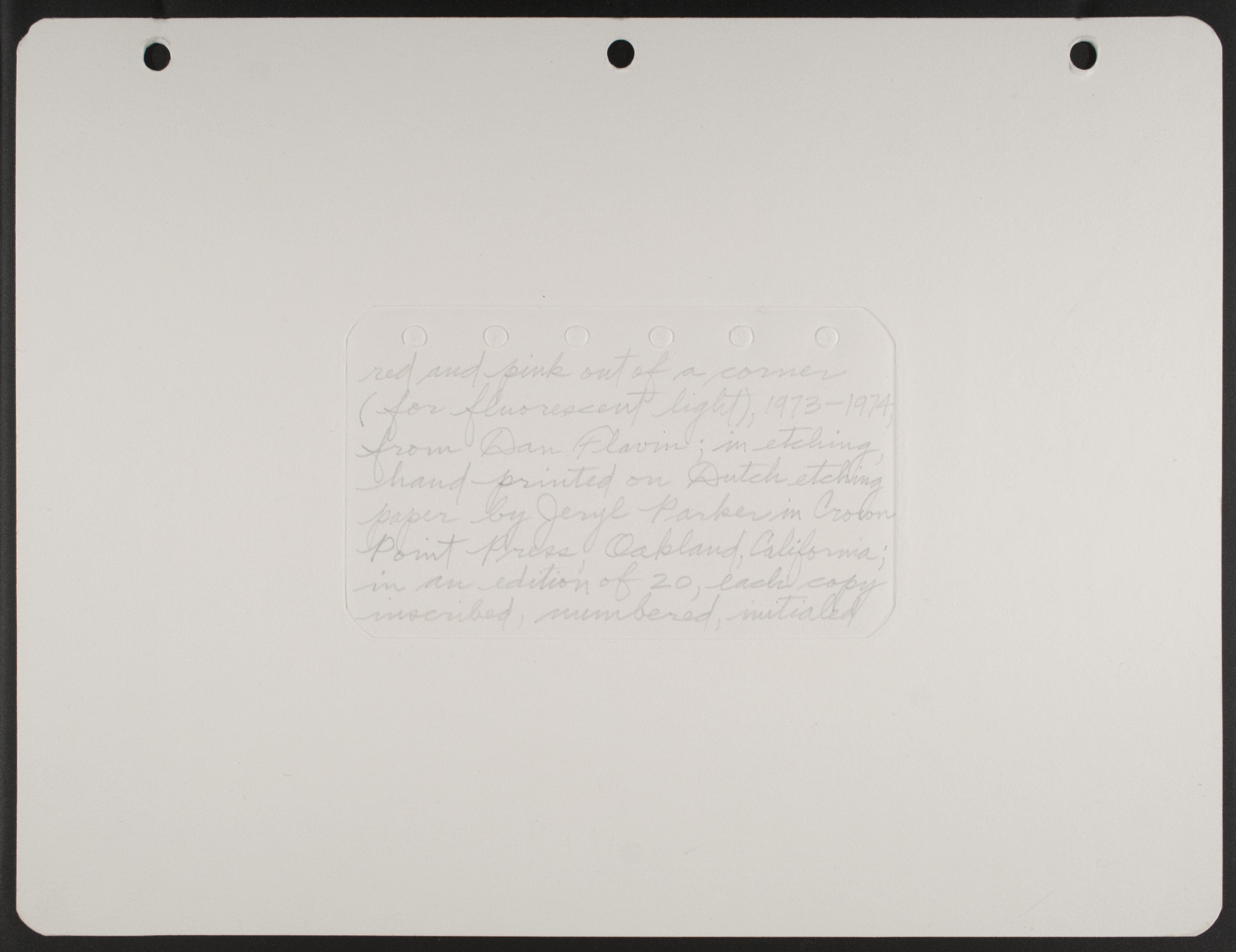 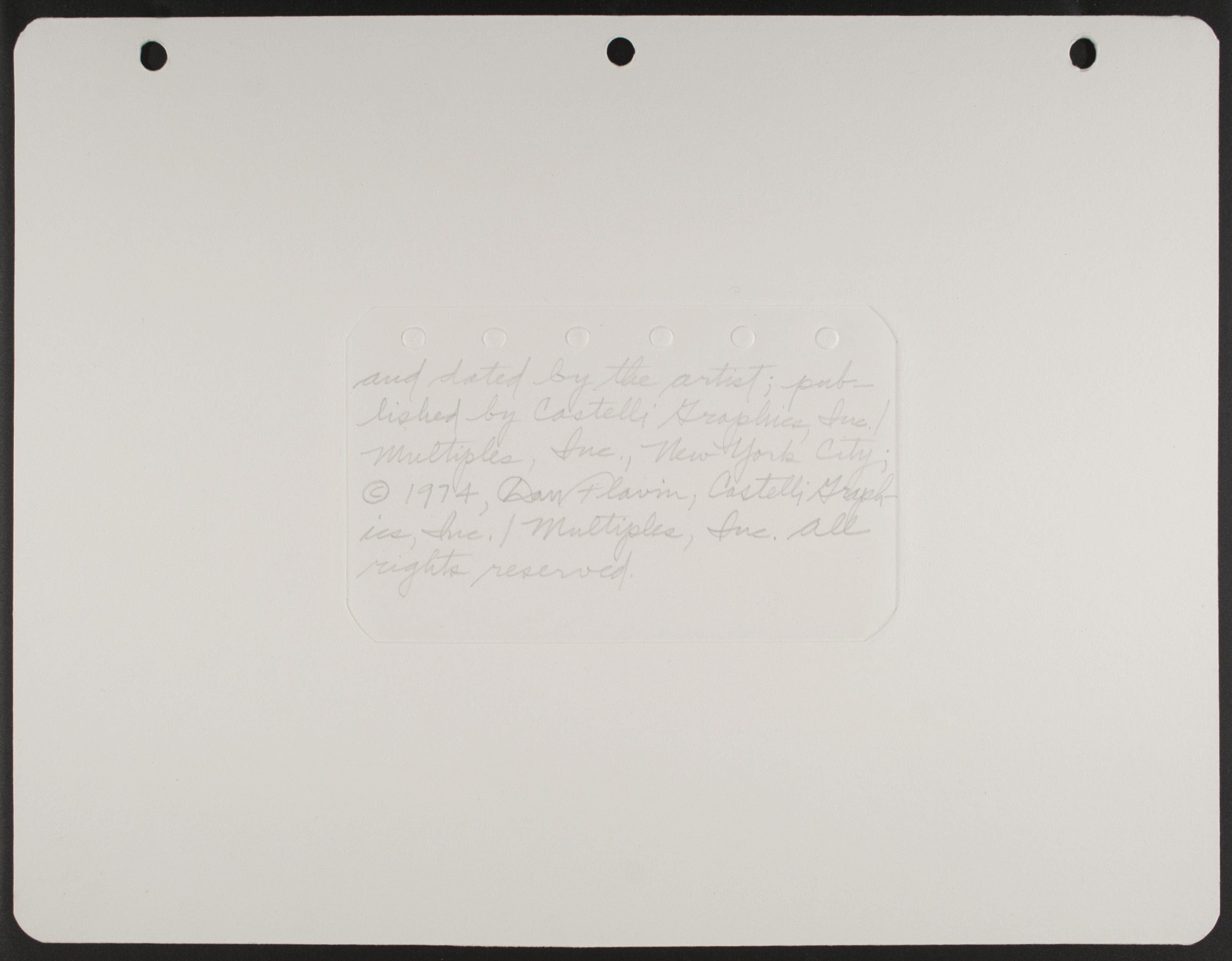 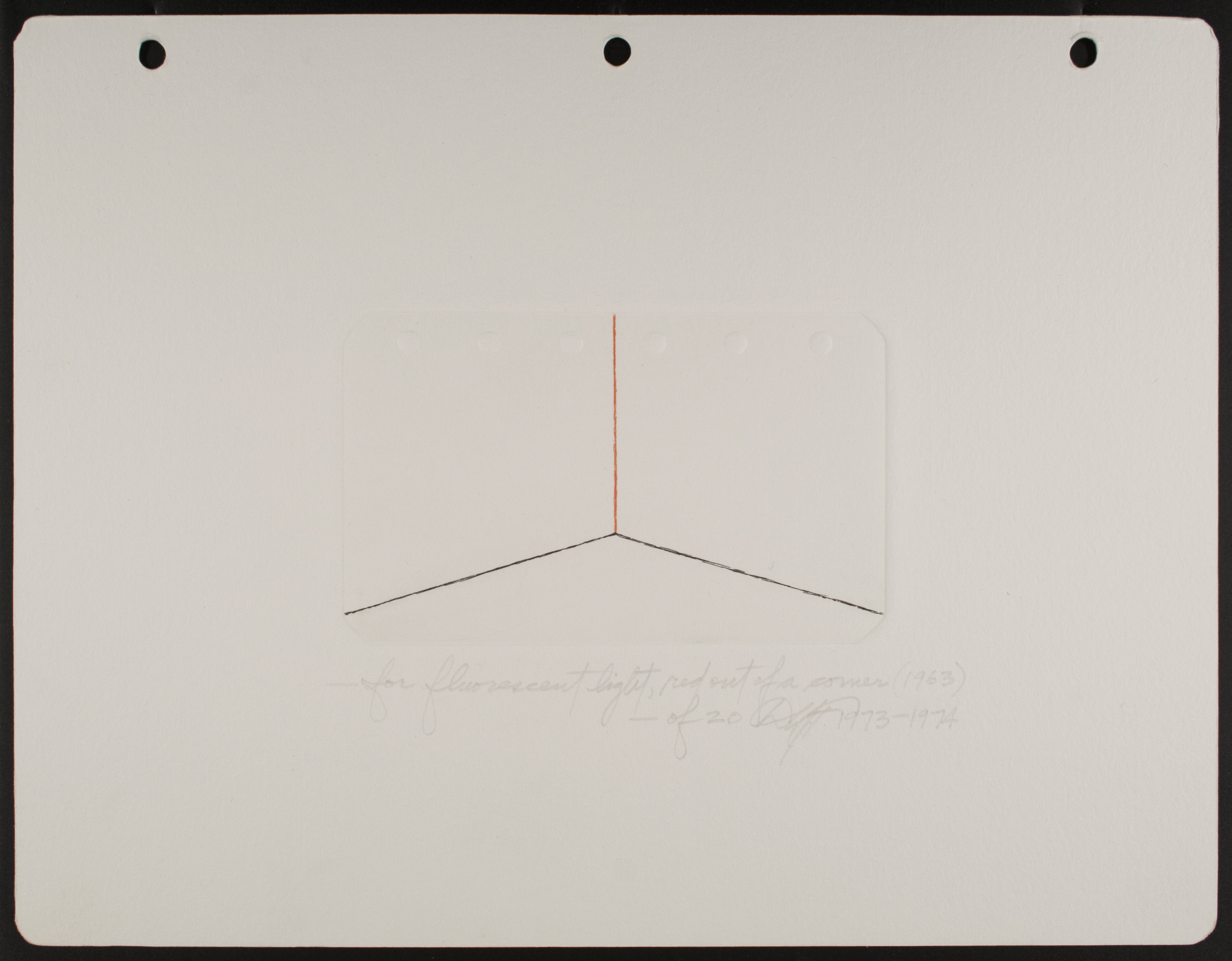 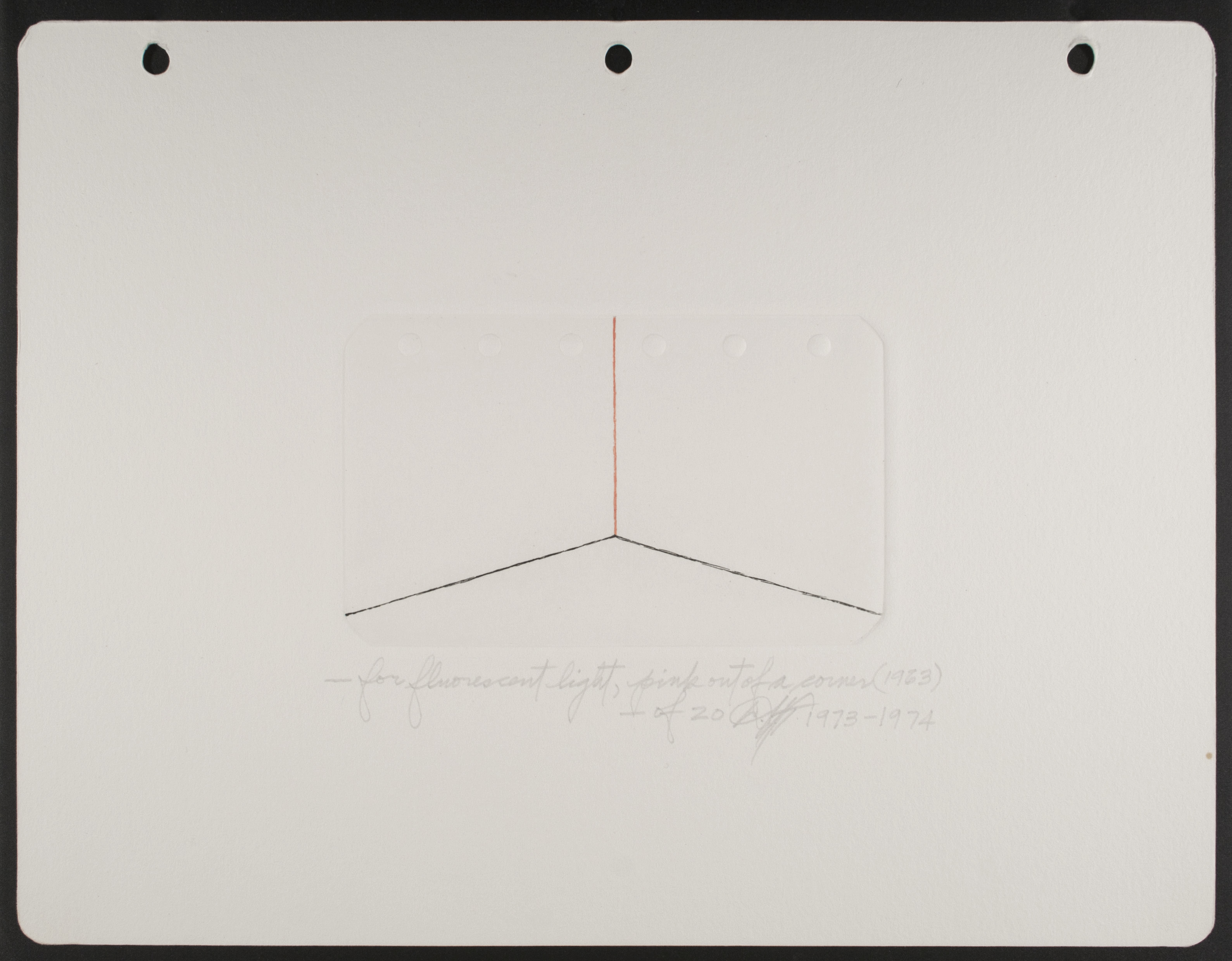 The prints exhibited here, collectively entitled Red and Pink Out of a Corner (For Fluorescent Light), were made as a result of a project produced by Kathan Brown, founder of the San Francisco Bay Area intaglio studio, Crown Point Press. Crown Point functioned in part as a contract shop, and although Dan Flavin worked in the press’s Oakland studio, the work was published by Castelli Graphics and Multiples Inc., New York. Brown’s studio was an integrative and collaborative space, “more a place for making discoveries, which is what art is about, than for manufacture.”1 To this end, during the 1970s a number of minimal and conceptual artists developed projects at Crown Point. Brown encouraged these artists to experiment with both traditional and nontraditional methods of printmaking, as their ideas directed, and provided skilled and supportive printers to assist in the execution of their plans. These printers emphasized consistent editions, achieved by evenly wiping the printing plate so that it carried the entire image without modulations dependent on printing variations. Because of this, for any printmaking project at Crown Point, the artist’s idea was “always paramount” – and Brown’s projects thus provided an ideal opportunity for artists with little exposure to or even little interest in the medium to nonetheless complete printmaking projects of great significance.2

For Dan Flavin, who as a scholar and collector of prints had long held a “general interest in that old art” of printmaking,3 the procedure for creating prints at Crown Point was not dissimilar to his own process for creating works in fluorescent light: Flavin came with the ideas and the drawings, and assistants completed the final product. For this first project at Crown Point, in 1973, Flavin returned, as he often did, to an idea from his past. This time, he looked to his first proposal toward a cornered light installation, from ten years prior, and to the resultant two fluorescent light works, pink out of a corner (to Jasper Johns) and red out of a corner (to Annina), which are represented together in this set of four prints.

Flavin later completed other etchings at Crown Point, but this is the only published work in color. The same two three-by-five-inch copper plates were employed for each print. One plate carried black ink in the lines that Flavin incised and then etched through hard ground to represent the triangular corner joining of floor to wall. Flavin incised the other plate, representing the pink or red lamps, in the same way, but the line character is different. This is because the plate carrying this colored ink was printed first, and while the ink was still wet the other plate was printed over it, flattening the line. The plates were prepared with rounded edges, and one of them (the second plate printed) was punched with six holes. Jeryl Parker, Flavin’s printer, perfectly aligned the two plates in printing, and on the final sheet the impression approximates a page of the notebook paper that Flavin carried with him and sketched on constantly. Each finished sheet was then punched with three holes and incorporated into a vinyl binder.4

The etchings thus are simultaneously closely related to and extensions of Flavin’s small notebook drawings: they retain the notebook pages’ intimate character, despite the fact that they were made for public presentation and distribution. As such, these prints deliberately evade the two categories that Flavin otherwise distinguished. They are neither working drawings toward an idea, completed by Flavin and to be kept by Flavin, nor are they finished drawings after an idea, completed by another hand and to be sold. Instead, these etchings are both originating sketches and finished products, creative experimentation and precisely delegated fabrication. They are an oddly personal glimpse into Flavin’s practice – writ small, and with a wink.

Dan Flavin (b. 1933, Queens, NY; d. 1996, Riverhead, NY) received training as a meteorological technician while enlisted in the United States Air Force (1953-1957) prior to attending classes at the extensive program offered by the University of Maryland in Osan-Ni, Korea. He took a class on Northern Renaissance Art at The New School for Social Research, New York (1956), and participated in four sessions at Hans Hofmann’s Eighth Street School for drawing and painting, New York. He then attended Columbia University, New York (1957-1959). Flavin’s first solo exhibitions were held in New York at the Judson Gallery (1961) and the Green Gallery (1964). His first major museum retrospective was organized by the National Gallery of Canada, Ottawa (1969). His work was included in numerous early exhibitions of Minimal art, including at the Wadsworth Atheneum Museum of Art, Hartford, Connecticut (1964); The Jewish Museum, New York (1966); and Gemeentemuseum, The Hague, The Netherlands (1968). The Dia Art Foundation opened The Dan Flavin Art Institute, Bridgehampton, New York (1983). His work was installed permanently in the Dan Flavin Gallery, the Menil Collection, Houston (1998). A retrospective on Flavin’s work opened at the National Gallery of Art, Washington, D.C. (2004), in association with The Dia Art Foundation, and traveled to the Modern Art Museum of Fort Worth, Texas; the Museum of Contemporary Art, Chicago; the Hayward Gallery, London; the Musée d’Art Moderne de la Ville de Paris; the Pinakothek der Moderne, Munich; and the Los Angeles County Museum of Art, California. Recent solo exhibitions have been held at David Zwirner, New York (2009); Paula Cooper Gallery, New York (2010); The Morgan Library and Museum, New York (2012); Kunsthalle Bielefeld, Bielefeld, Germany (2013); MUMOK/Museum moderner Kunst Stiftung Ludwig Wien, Vienna (2013); Kunstmuseum St. Gallen, Switzerland (2013); and Tate Modern, London (2013). Flavin lived and worked in New York, and his estate is represented by David Zwirner, New York.
Anne Wheeler Biography
Anne Wheeler (b. 1980, Seattle, WA) received her BA from the University of California, Berkeley, and her MA from the Institute of Fine Arts, New York University. She currently is a PhD candidate (ABD) at the Institute of Fine Arts, New York University, and an Assistant Curator at the Solomon R. Guggenheim Museum, New York. She lives and works in New York City.
References